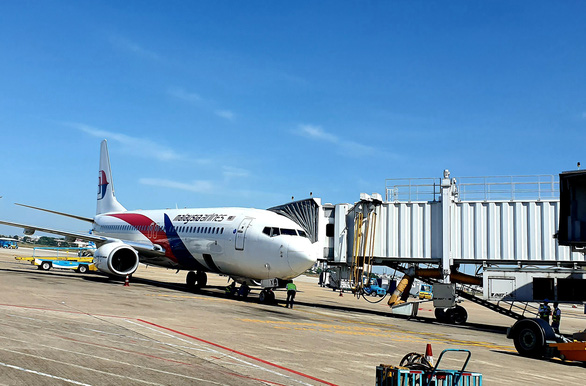 A Malaysia Airlines aircraft, one of the 24 international carriers that began operating flights to Vietnam in mid-February, 2022. Photo: Cong Trung / Tuoi Tre

The Civil Aviation Authority of Vietnam (CAAV) has sent a Notice to Airmen (NOTAM) to all air carriers and operators worldwide announcing that Vietnam has removed all restrictions on international air passenger transport.

Under the NOTAM, Vietnamese and foreign airlines are allowed to operate regular passenger flights to and from Vietnam as of February 15, with frequencies and routes specified in the bilateral and multilateral aviation agreements between Vietnam and other countries and territories, the CAAV said on Thursday.

The agency previously asked the Vietnam Air Traffic Management Corporation (VATM) to issue a NOTAM to lift all restrictions on international flights so that airlines could restore pre-pandemic operations, the Vietnam News Agency reported.

Passengers entering Vietnam on such international flights are to be required to comply with all local epidemic prevention measures, the NOTAM said.

This notice marked the end of the country’s pilot re-launch of regular international flights which began in early January, three months after it reopened the economy under a strategy of living safely with the coronavirus while boosting vaccination.

From January 1 to February 14, around 153,000 foreign passengers flew to and from Vietnam, according to the CAAV.

Currently, 24 international airlines are operating flights to Vietnam, including those from the U.S., the UK, France, Germany, Russia, Turkey, Japan, South Korea, Malaysia, Thailand, Qatar, the UAE, and Singapore, among others, the CAAV said.

Due to the pandemic, Vietnam closed its borders from March 2020 to the end of 2021, with exceptions granted to Vietnamese repatriates, foreign experts, diplomats, investors, skilled workers, and students, provided that they met strict quarantine requirements.

As of Thursday, the country, whose population is around 98 million, had given 79,879,844 residents their first COVID-19 vaccine doses, while 75,740,234 of those residents have been given a second dose and 34,141,698 have been administered a third dose, according to the Ministry of Health.

Health workers have administered the first vaccine shots to all eligible adults, and 53 out of 63 provinces and cities have reached a second-dose vaccination rate of over 90 percent.