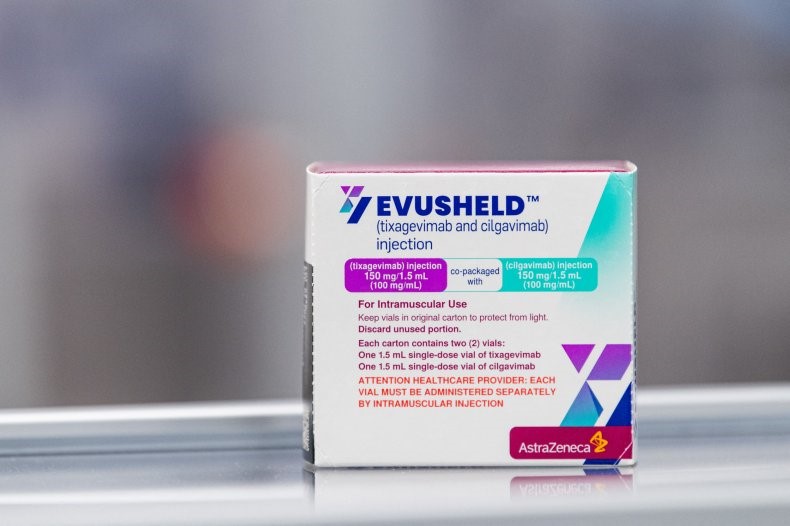 This image shows a box of Evusheld at the AstraZeneca facility for biological medicines in Södertälje, south of Stockholm, Sweden. Photo: AFP via Getty Images

Vietnam’s Ministry of Health has approved the importation of Evusheld, a drug developed by AstraZeneca to fight against COVID-19 infection by combining two long-acting monoclonal antibodies.

The ministry’s Drug Administration of Vietnam (DAV) has confirmed the licensing of the drug, which is the world’s first monoclonal antibody licensed to produce prophylactic medicine for COVID-19 by the U.S. Food and Drug Administration (FDA) in late 2021.

Evusheld, which is administered intramuscularly, has been approved by the FDA for conditional use for adults and adolescents aged at least 12 years and weighing 40 kilograms or more.

The medication, which needs to be preserved at minus eight to minus two degrees Celsius, has proven prevention efficacy for at least six months against the coronavirus, including the Omicron variant, the DAV said.

Evusheld was developed from a mixed solution of two monoclonal antibodies tixagevimab and cilgavimab to prevent COVID-19 as well as severe disease progression in high-risk groups, including people with immunodeficiency, or those who are unqualified for vaccination.

The human body will have the necessary amount of antibodies to protect against COVID-19, with up to 83 percent efficacy, just a few hours after Evusheld injection.

No cases of severe illness or death were recorded during the follow-up period of six months post-injection in the PROVENT study by AstraZeneca, a British-Swedish multinational pharmaceutical and biotechnology company.

“Millions of people in the U.S. and around the world remain at serious risk for COVID-19 because their immune systems do not generate a sufficient immune response, even after receiving all recommended doses of vaccine,” Myron J. Levin, professor of pediatrics and medicine at the University of Colorado School of Medicine in the U.S. and principal investigator on the last-stage trial of the drug, was quoted as saying on AstraZeneca’s website.

“Evusheld is an easily administered new option that provides long-lasting protection that could help them return to their everyday lives.”

Dr. Ngo Quy Chau, president of the Vietnam Respiratory Society, said that many people with immunodeficiency, cancer, autoimmune arthritis, organ transplant or systemic diseases, among others are worried that their bodies fail to produce sufficient antibodies after COVID-19 vaccination.

These people are particularly vulnerable to COVID-19 and most of them live in anxiety while isolating themselves from society, Dr. Chau said.

“Monoclonal antibody therapies such as Evusheld will provide an extra layer of defense to increase protection for the high-risk group, while minimizing the risk of severe progression, hospitalization, and death,” the doctor added.

The first Evusheld shipment to Vietnam is expected to arrive at the end of this month, and the drug will reportedly be used first at the facilities of Tam Anh General Hospital in Hanoi and Ho Chi Minh City.

The coming batch is based on a contract for 20,000 doses signed with AstraZeneca by the Vietnam Vaccine Joint Stock Company on November 2, 2021, according to VnExpress.