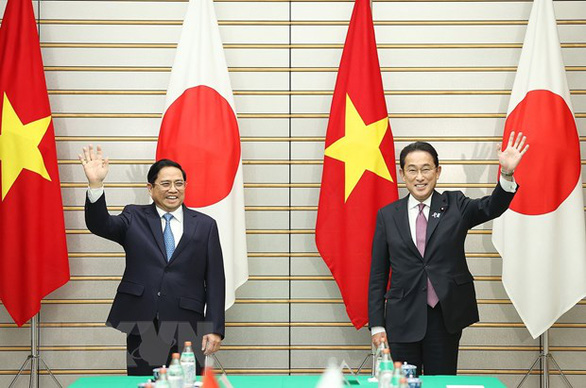 Vietnam and Japan have announced a joint statement and signed 11 cooperative agreements during the four-day visit by Vietnamese Prime Minister Pham Minh Chinh and his entourage to the East Asian country starting Monday.

The joint statement was released on Wednesday after the talks between visiting PM Chinh and his Japanese counterpart Fumio Kishida, with an aim to open a new era in their two countries’ bilateral extensive strategic partnership for peace and prosperity in Asia.

The document also includes cooperation activities for the 50th anniversary of the establishment of diplomatic relations between Vietnam and Japan.

Regarding regional and international issues, the two countries continue their close coordination at international and regional forums such as the United Nations, the International Mekong River Commission and ASEAN, as well as strengthening collaboration to deal with common challenges of the international community like climate change, natural disaster prevention, environmental protection, and women and children issues, the joint statement said.

In respect of the East Vietnam Sea issue, the two leaders emphasized the importance of ensuring security and safety of navigation and aviation in the waterway, and agreed that all disputes had to be resolved by peaceful means and international law, especially the 1982 United Nations Convention on the Law of the Sea (UNCLOS), according to the joint statement.

They also attached significance to fully and effectively implementing the Declaration on the Conduct of Parties in the East Vietnam Sea (DOC), and soon finalizing the effective, substantive, and legally binding Code of Conduct for the sea (COC).

Along with issuing the joint statement, the two premiers witnessed the signing of 11 cooperation deals between the two countries’ agencies and enterprises in various fields.

Among the deals are an agreement on mutual legal assistance in criminal matters, a diplomatic note on the fourth Japanese loan for the project for improving the water environment in Ho Chi Minh City’s Tau Hu – Ben Nghe – Doi – Te basin, another diplomatic note on special-use equipment for transport serving maritime search and rescue activities, and a joint plan on climate change toward the goal of being carbon neutral by 2050.

Four other MoUs were inked between Vietnamese agencies and their Japanese partners including Japanese pharmaceutical company Shionogi, the Japan Bank for International Cooperation, the government of Wakayama Prefecture, and the national association for support and development of foreign human resources in Japan.

During their earlier talks, the two prime ministers expressed their satisfaction with their countries’ bilateral relationship and agreed on major directions and measures to open a new stage of development in their extensive strategic partnership.

PM Chinh congratulated Kishida on his re-election as the prime minister of Japan and thanked him for his important contributions to the development of relations between the two countries in his various positions.

The Vietnamese cabinet chief conveyed the greetings and invitation to visit Vietnam from Vietnam’s Party General Secretary Nguyen Phu Trong to the Japanese king and queen, PM Kishida, and other Japanese officials.

The host country’s premier highly appreciated PM Chinh as the first distinguished guest of the new Japanese government and affirmed that the two countries’ relations have developed rapidly in recent years to become the best ever today.

Affirming Japan’s comprehensive support for Vietnam’s COVID-19 fight, PM Kishida announced that the Japanese government will provide an additional 1.5 million doses of COVID-19 vaccine for the Southeast Asian country, bringing its total vaccine donation to the nation to 5.6 million doses, along with other medical equipment and supplies.

The two sides agreed to continue closely cooperating in research and production of COVID-19 vaccines and drugs.

Having established diplomatic relations with Vietnam since 1973, Japan is the biggest official development assistance (ODA) provider, the second-largest investor and the fourth-largest trade partner of the Southeast Asian country.