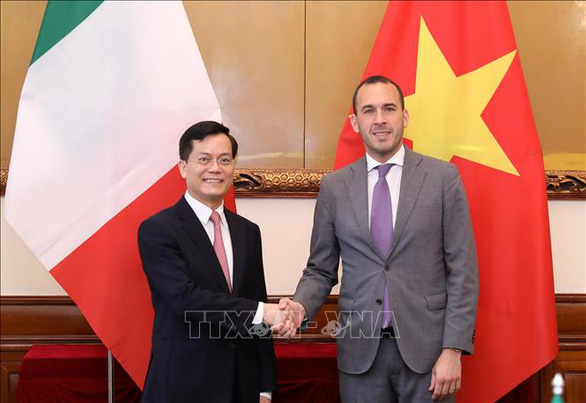 Vietnam and Italy pledged to boost future bilateral cooperation during the fourth political consultation session held between the two countries in Hanoi on Wednesday.

The event came as the two countries continued coordinating activities to celebrate their 50th anniversary of diplomatic relations and 10 years of strategic partnership, slated for 2023.

Representatives from both Italy and Vietnam used the meeting as a platform to share their appreciation for the bilateral relationship between both countries, particularly in terms of politics, diplomacy, the economy, and science and technology.

They also agreed to continue expanding their ties to areas such as healthcare, environmental issues, renewable energy, and climate change response.

According to Deputy Minister Ngoc, Vietnam hopes to keep fostering its strategic partnership with Italy and appreciates the two sides’ cooperation in implementing their plan of action for the partnership for the 2021-23 period.

The Vietnamese diplomat also emphasized the importance of creating a solid legal framework and a favorable business and investment environment for the business communities of both countries.

The Italian deputy minister said Italy considers Vietnam as a top priority partnership in the region and looks forward to further cooperation in innovation, aerospace, hydrogen energy, and cybercrime prevention and control.

The two sides were committed to working together to reach US$6 billion worth of two-way trade in 2022 and $10 billion in the following years, according to the Vietnam News Agency.

They agreed to strengthen the exchange of high-level delegations, continue implementing bilateral cooperation mechanisms, and support each other in international and multilateral forums.

The two diplomats emphasized the importance of ensuring freedom of navigation, overflight, security and peace in the East Vietnam Sea, and of respecting international law, including the 1982 United Nations Convention on the Law of the Sea (UNCLOS).

Prior the consultation session, Stefano spent Tuesday visiting Vietnamese Minister of Foreign Affairs Bui Thanh Son and joining Deputy Minister of Industry and Trade Dang Hoang An in chairing the seventh meeting of the Joint Commission on Economic Cooperation in Hanoi.