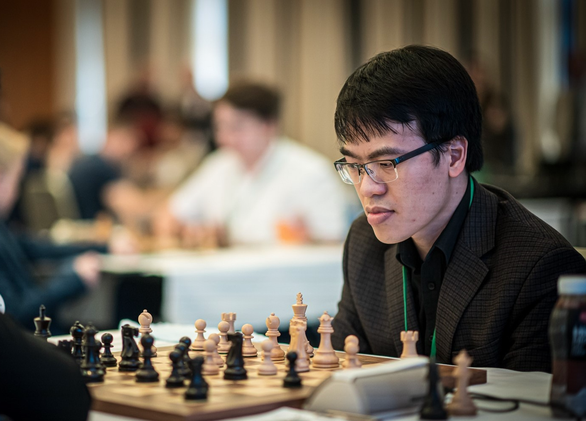 Vietnamese grandmaster Le Quang Liem is pictured during a match at the Prague Masters 2022 in the Czech Republic, June 2022. Photo: Prague Chess Festival

Vietnamese grandmaster Le Quang Liem has fallen to second place in the standing at the Prague Masters 2022 after drawing with India’s Vidit Santosh Gujrathi, the No. 1 seed of the tournament, in their eighth match on Friday morning.

Liem aimed at a victory over Vidit Santosh Gujrathi, who is the No. 2 chess player in India, just behind the legendary five-time world champion Viswanathan Anand.

With the white pawn advantage, Liem moved forward to try to score points, but Gujrathi managed to solve his attacks.

The two players exchanged pieces in a series of closely related moves and eventually tied after 81 moves.

The draw saw Liem maintain his unbeaten run at the tournament with 5.5 points after three wins and five draws but he lost the top position to Pentala Harikrishna, who defeated Salem Saleh from the UAE in another match on the same day to equal the Vietnamese chess ace, based on tie-break regulations.

Moving forward, Liem will play Francisco Vallejo Pons of Spain in the ninth round of the tournament.

The Prague Masters 2022 is hosted by the Czech Republic from June 8 to 18, with one match played daily.

It consists of four groups of different levels, with the masters being the most competitive.

Liem was invited to play in the masters group and is the fourth seed in the tournament.