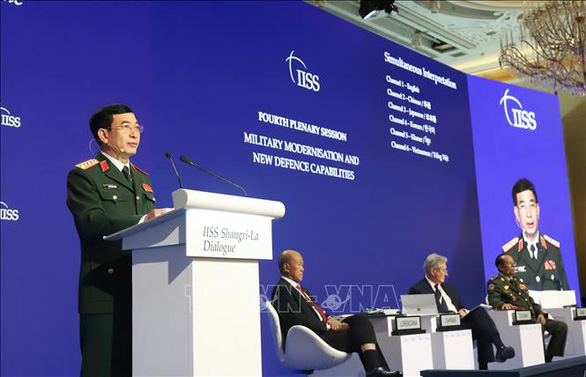 Vietnam’s standpoint is to build and strengthen its national defense capacity to safeguard the fatherland, protect peace, and ensure its people’s interests, based on its established ‘Four No’s’ principle, Minister of National Defense Gen. Phan Van Giang has affirmed.

The minister was speaking on Saturday while addressing the fourth plenary session of the 19th Shangri-La Dialogue 2022, scheduled for June 10 to 12 in Singapore, after a two-year COVID-induced hiatus.

At the session, which focused on military modernization and new defense capabilities, Giang emphasized that peace, cooperation, and development have always been the common aspiration of mankind, but strategic competition, conflicts of interest, and disputes over sovereignty and territory among countries have continued to occur.

Therefore, every country in the world needs to bolster their national defense capability to safeguard their territorial integrity when necessary, the general said.

Giang iterated Vietnam’s policy to strengthen its defense capability with its own internal forces, conditions, and capabilities, based on its ‘Four No’s’ policy, which was specified in the 2019 Vietnam National Defense White Paper.

Firstly, Vietnam does not join any military alliance, and secondly, it does not side with one country against another.

Thirdly, the Vietnamese government does not let any other country set up military bases in its territory or use the same territory to launch military activities against other countries.

Last but not least, the Southeast Asian country will not resort to the use or threat of force in international relations, General Giang underlined.

From Vietnam’s perspective, strengthening defense capabilities is not simply to purchase, manufacture, and modernize weapons and military equipment, but to also enhance the overall defense strength through the effective combination of the army, the people, and the entire political system, Giang told the session.

“In order to improve defense strength, it is essential to modernize weapons and military facilities,” the minister stated.

“However, Vietnam always advocates armament modernization for purposes of safeguarding the fatherland and protecting peace.”

It is necessary to be transparent in enhancing defense capacity to avoid suspicion and misunderstanding that may result in an arms race, undermining trust between nations, increasing confrontation risks, and triggering conflicts and wars, Giang advised.

Regarding the East Vietnam Sea issue, the minister said that Vietnam constantly adheres to the principle of settling disputes and disagreements by peaceful means and respecting the independence, sovereignty, and legitimate interests of countries.

Vietnam advocates complying with international law, including the 1982 United Nations Convention on the Law of the Sea (UNCLOS), and is committed to strictly implementing the Declaration on the Conduct of Parties in the East Vietnam Sea (DOC), while looking forward to building an effective and substantive Code of Conduct (COC) for the maritime region, Giang told the session.

As an inter-governmental security forum held annually since 2002 by an independent think tank, the International Institute for Strategic Studies (IISS), the Shangri-La Dialogue gathers top-level military officials, diplomats, and arms manufacturers from around the globe to discuss security issues.