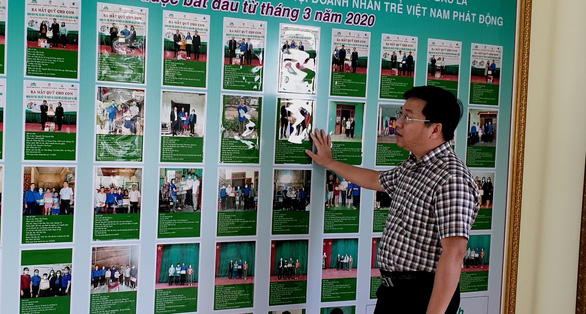 The board features photos and information of the 57 orphaned children that have been ‘adopted’ by the ‘Cho Con’ fund over the past two years in Quang Tri Province, Vietnam. Photo: Q. Nam / Tuoi Tre

An entrepreneur in Quang Tri Province, central Vietnam and his staff have opened their hearts to nearly 60 kids who suffer and struggle to survive after losing one or both of their parents.

At the hall of Quang Tri General Trading JSC, based in Dong Ha City, the province’s capital, is a large board with photos of 57 orphaned children and their circumstances.

The children, who all have lost one or both of their parents, now bask in the overflowing affection of the employees.

In each photo, the children are featured with one of the employees, who are mostly the company’s executives and staff.

Doubling as the orphans’ ‘parents’ and ‘siblings’ over the past two years, these people have offered the vulnerable children a way out of poverty and neglect and take them one step closer to a brighter future.

Shoulders to lean on

The portrait of four-year-old Mai Hoang Minh Khoa, from Ward 2, Dong Ha City, is in the first row on the board.

The dark-skinned, bony little boy lost his father in early 2019, when he was only five months old.

His father’s passing caused public outcry as the man died from stabbing wounds from a young electric bicyclist, who he tried to remind to obey traffic rules.

The good deed by Khoa’s father was well received in the community.

One businessman felt a particular urge to provide financial and emotional support for the infant, who was too young then to be aware of what happened to his father.

“Khoa’s father died trying to make the world a better place to live in, so we feel obliged to do something for the little boy in return,” said Ho Xuan Hieu, director of Quang Tri General Trading JSC.

Khoa is the first beneficiary in a fund called ‘Cho Con’ (For You, My Child), put forward in early 2020 by Hieu and his company to aid parentless children from across the locality.

The program, which treats the kids with love as if they were family, shows that adversity cannot get in the way of goodwill.

With hopes that the orphans will grow up with bright, forward-looking disposition, the organization offers them monthly grants of VND500,000 (US$22) until they turn 18.

The grant means the world to Khoa, who has benefited from the program since he was one and a half years old, and his mother, who struggles to provide for her young family with her meager income as a kindergarten teacher.

Hieu said the program is open to more children whose parents will not be coming back to them.

Without the basic needs for survival, parentless children are put at a great disadvantage and may struggle to make it to adulthood.

The program’s efforts have kept the children fed and in school, but Hieu said they do not only take in well-performing students.

“Children don’t need to excel in their studies to be ‘adopted.’ They can’t focus on their studies unless they survive in its true sense,” he noted, adding well-performing students receive scholarships in addition to the monthly support.

To better help the orphans grow through childhood, the program organizer also assigns staff members who live in the vicinity of the child recipients or members of the local chapters of the Ho Chi Minh Communist Youth Union to mentor them.

Another beneficiary with a pitiable plight is Tran Quoc Bao, a ninth grader in Cam Hieu Commune, Cam Lo District.

His parents’ passing away on the same day from a dispute six years ago when Bao was only in third grade marked the end of the little boy’s previously happy life.

Left all alone, Bao and his younger brother were taken in by their uncles but it never felt like home and the relatives did not have enough to provide for the two boys.

Bao was recommended to the ‘Cho Con’ program by a former teacher and began receiving much-needed support in early 2021.

Hoang Kim Trong, a company staff member, who lives near Bao’s home, is assigned to visit the boy on a regular basis and has gradually begun to feel like a big brother to him.

“Bao is left so vulnerable after all that he went through. I try to lift his spirit during this dark time,” Trong said.

To Hieu’s, the fund initiator’s surprise, his passion and dedication in supporting the orphans struck a chord in the wider community one year following its launch.

From Hieu’s posts on social media, many philanthropists from around Vietnam began making donations and offering help.

“The more helping hands, the more we can do to help the orphans,” Hieu shared, adding he and the company staff consider the children their own.

Hieu said the well-performing orphans are also eligible for rewards applicable to the company staff’s children.

The firm is no stranger to such good deeds.

Before the launch of the ‘Cho Con’ fund to open up new opportunities to parentless children, the organization formed its own blood bank for blood donation.

Its entire executives and staff of nearly 500 members have signed up for blood donation at hospitals, and they are always ready to give to save lives.