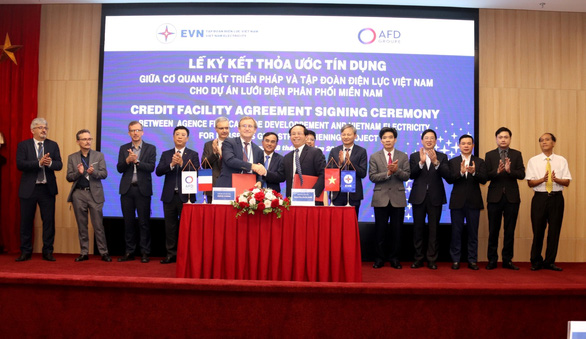 The Vietnam Electricity Group (EVN) and the French Development Agency (AFD) on Monday signed a credit agreement with a non-government guaranteed loan worth €80 million (US$87.8 million) to implement a power distribution project by EVN’s Southern Power Corporation (EVN SPC).

The power distribution project is comprised of 33 sub-projects, covering Ben Tre, An Giang, and Binh Thuan, among others.

These sub-projects are included in the electricity planning scheme for 2016-25 with a vision toward 2035, approved by the Ministry of Industry and Trade.

All of the sub-projects show economic and financial feasibility, according to a feasibility report ratified by EVN SPC.

EVN chairman Duong Quang Thanh said the €80-million loan was expected to help expand the southern power grid and facilitate the use of renewable energy sources that were developing strongly in southern provinces.

In his remarks, Herve Conan, director of the AFD in Vietnam, said these kinds of projects will help EVN and Vietnam achieve the target of low-carbon emissions and sustainable development, implement the Paris agreement on climate change, and fulfill its commitment of net zero emissions by 2050 made at the 26th UN Conference of Parties (COP26) in Glasgow last year.

Since 2017, AFD loans have played a part in the Vietnamese electricity giant’s investment, meeting requirements for electricity supply in socio-economic development.

The AFD has pioneered in providing direct loans for EVN’s power projects without the government guarantee.