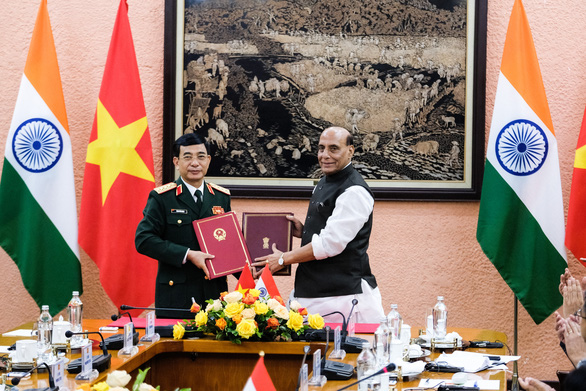 Vietnam’s defense cooperation ties with other countries, including India, are aimed at contributing to peace and security around the world, according to the Vietnamese Ministry of Foreign Affairs.

Deputy spokesperson for the foreign ministry Pham Thu Hang commented on the ties at a regular press conference in Hanoi on Thursday, during which she spoke about a Memorandum of Understanding (MoU) on mutual military logistics support recently signed between Vietnam and India.

Her statement was made in response to questions from foreign reporters regarding Vietnam’s intention to enter into similar deals with other countries following the MoU inked during Indian Defense Minister Rajnath Singh’s visit to Vietnam from June 7 to 10 at the invitation of his Vietnamese counterpart General Phan Van Giang.

“Vietnam follows a defensive and peaceful defense policy, and its defense cooperation relations with different countries are for the purposes of contributing to peace, security, stability, cooperation, and development in the region and in the world,” Hang affirmed.

During Singh’s visit to Vietnam, he and General Giang also signed a joint vision statement on Vietnam-India Defense Partnership toward 2030.

“These are important cooperation documents, helping promote the defense cooperation relationship between the two countries in the coming time,” the Vietnam Government Portal commented on the MoU and the joint vision statement.

After Minister Singh’s visit, the Indian naval ships INS Sahyadri and INS Kadmatt arrived in Ho Chi Minh City for a courtesy visit from June 24 to 26.

Such deals allow warships of relevant countries to access each other’s military facilities for refueling, logistics, and repair purposes.

On the Indian side, these help its army simplify logistics for military operations carried out far from its territory.

India and Vietnam established a comprehensive strategic partnership in 2016, with defense cooperation serving as a key pillar of the partnership.

New Delhi officials have repeatedly affirmed that Vietnam is an important partner in India’s Act East policy and its vision of a free and open Indo-Pacific region.

The two countries celebrated 50 years of their diplomatic relations in January this year.