Although much of the economy was impacted by the fourth wave of COVID-19 in 2021, Viet Nam’s imports and exports reached a record of nearly US$670 billion, an increase of almost 23 per cent from 2020. 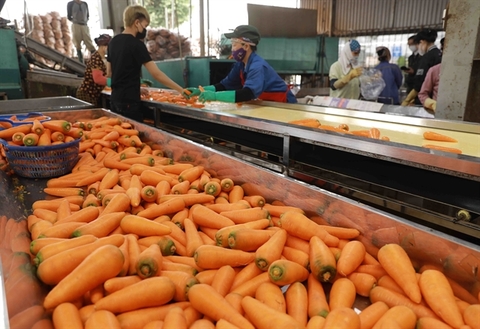 Farmers in Nam Sach, Hai Duong Province process the local grown carrot for export to Japan, Malaysia and the Middle East. Viet Nam’s imports and exports reached a record of nearly S$670 billion in 2021 including great contribution from agriculture products.

This rise has put Viet Nam into the top 20 leading economies in terms of international trade.

Minister of Industry and Trade Nguyen Hong Dien announced the data at a meeting in Ha Noi on Sunday. He said: “Entering 2022, the trade industry has set a target of increasing export turnover by 6 to 8 per cent from 2021, while the trade balance will maintain a surplus.”

In a year-review meeting, Dien said of the total turnover, export reached $336.25 billion, up 19 per cent while the trade surplus was $4 billion. He said the industry had a successful year in exporting despite a slew of difficulties.

The minister said: “Viet Nam has maintained a trade surplus for the sixth consecutive year.”

Deputy Minister of Industry and Trade Tran Quoc Khanh said export growth has surpassed the target of 4-5 per cent as set by the National Assembly and the Government.

Khanh said shipments of raw materials decreased last year while the export volume of processed and industrial products increased; processed products accounted for 86.24 per cent of the export structure.

Minister Dien said that in overcoming difficulties, the industry and trade sector has completed the year with many targets exceeding the plan. In detail, industrial production has continued to expand and maintain a growth rate of nearly 5 per cent. The processing and manufacturing industry increased by 6.37 per cent, continuing to affirm its role as a driving force for the growth of the whole industry, making positive contributions to economic growth, creating jobs and ensuring social security.

The oil and gas industry finished all targets ahead of schedule, contributing the most to the budget with VND75.4 trillion. The coal industry has made efforts to overcome difficulties and completed its target plan for 2021.

MoIT added that the electricity sector has successfully served the socio-economic development and people’s daily life, putting into operation eight power projects with a total capacity of 4,350 MW into use and lowering the electricity prices in the country.

At the meeting, MoIT’s representative also recognised the dependence on the Foreign Direct Investment sector, which has increased compared to recent years. However, the added value of exports has not performed as expected as the market diversification of some products was still slow and unable to meet the standards and quality requirements of the markets. This is not making good use of tariff preferences gained from FTAs.

The representative said: “Some agricultural products are too dependent on the neighbouring market and there is always a potential risk of prolonged congestion at the border gate.”

While exports were a highlight last year, the export capacity of domestic businesses, especially small and medium enterprises, was not high.

At the meeting, Deputy Prime Minister Le Van Thanh expressed his appreciated to the Ministry of Industry and Trade (MoIT) for their role in overcoming challenges to achieve these strong results. He also pointed out the difficulties and limitations of the industry, known as the slow implementation of the national electricity master plan and the national energy master plan for the period 2021-2030 and a vision to 2050.

The deputy PM said the progress of implementing key projects of some corporations and enterprises was still slow and has not met the requirements. Border trade management has shortcomings and the MoIT should improve the situation of smuggling, trade fraud, imitation and counterfeit goods in Viet Nam.

Thanh emphasised that the MoIT should focus on leading and directing the construction and implementation of national electricity and the energy master plans, as they were of great significance.

He also asked the MoIT to focus on removing difficulties and improving production and business efficiency in energy, processing, manufacturing, chemicals, fertilisers, and goods production industries such as textiles and leather, wood processing, agriculture, forestry and fishery.

At the same time, the department should promote exports and diversify markets and export goods, especially to new potential markets, as well as solve problems in customs clearance activities, and prevent congestion at border gates, especially the Viet Nam – China border gates.