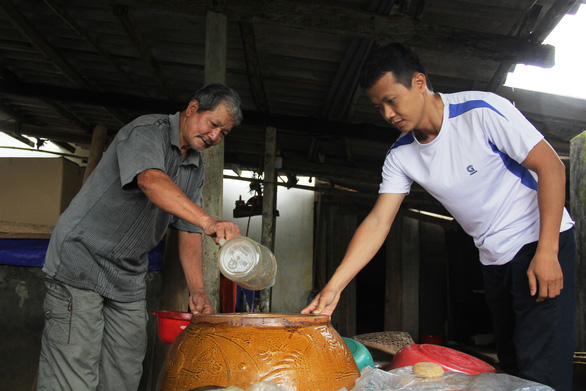 A doctorate holder from Quang Ngai Province, central Vietnam makes sure his never-say-die attitude and expertise from years of training and working in South Korea help keep his family trade of making nuoc mam (fish sauce) not only survive through the years but thrive further.

After successfully defending his PhD dissertation at Gachon University, South Korea, 35-year-old Tran Anh Vy, from Tinh Khe Commune, was offered a teaching and research job at his alma mater.

But his heart and mind are on his family’s long-standing business of making fish sauce, a savory Vietnamese condiment.

Together with his wife, Vy spent three years working on γ-Aminobutyric Acid (GABA) to improve the quality and highlight the flavor of the traditional fish sauce.

Gamma aminobutyric acid (GABA) is a naturally occurring amino acid that works as a neurotransmitter in the brain.

While neurotransmitters function as chemical messengers, GABA is considered an inhibitory neurotransmitter because it blocks, or inhibits, certain brain signals and decreases activity in the nervous system, according to healthcare websites.

Vy has currently been on a break from his job at the South Korean university to get back to his hometown and dedicate fully to his project, which aims to convert protein in fish sauce into GABA by fermentation.

It was a busy day, as usual, at Son My Fish Sauce Plant, tucked away in Tinh Khe Commune.

Seventy-year-old Tran Quoc Ca, the business owner and Vy’s father, was having his hands fulfilling orders alongside his son.

With 30-year experience as a professional fish sauce maker under his belt, Ca has grown a name for his premium quality condiment, which provides an essential savory flavor found in much of Vietnamese cuisine.

The professional’s products and expertise have been showcased at local fairs and expositions.

Ca, however, admitted that is the farthest he can go in ensuring the legacy left behind by his forefathers.

“All I can do is churn out the sauce from salted fish fresh pressed after fermentation in a not-so-secret formula that is passed down from predecessors and make improvements here and there,” the veteran said.

“I used to dream of taking my sauce to a higher level, but not now.”

Ca has three children but none follow in his footsteps until now.

Vy shares his father’s passion for excellence and the young man also aspires to break new ground and make a difference in his area of expertise.

The academic believes he has found his true calling and began to do research while he was studying in South Korea.

“Koreans have done an exceptional job in promoting their cuisine to the world,” he said.

“If they are proud of their kimchi [fermented cabbage], we Vietnamese always hold mam [salted fish] close to our hearts.”

Vy hopes one day fish sauce will be placed on a par with kimchi in the global arena and he will whip up a recipe for success with products that cater to homegrown cravings while also appealing to international tastes.

But Vy knows it will be a long way before he tastes success.

It was not long before the young man received a full scholarship at Gachon University, South Korea, researching nano materials in the science of biology and catalysts to develop new-generation cancer-fighting drugs and vaccines.

As his research areas are basically chemical biology, Vy knows he must treat fish sauce as something more than food if he is to catapult the condiment to a new ground.

He saw his chance and made his move with his research on generating medical properties for the salted fish.

It was then that he met Vo Thi Thu Thao, his future wife, who was working on her master’s degree in food microbiology at the same South Korean institution.

Hooked on her husband’s plan to yield a productive virus with medical properties, Thao signed up for the topic of classifying virus strains that potentially produce GABA in fermented fish found in Vietnam and South Korea.

Vy said his wife’s research topic aroused much interest in her instructor.

“He was really supportive and hopes we can bring out the new values in Vietnamese fish sauce,” he recalled.

The academic couple are not disappointed.

They were finally able to produce GABA following their three-year efforts and began to envision a brighter future for the country’s signature condiment.

“The study, also part of my wife’s master’s thesis, was published in a scientific journal,” Vy added.

Vy’s laboratory success prompted him to put his research findings into actual operation without delay.

The young PhD holder filed for temporary resignation at Gachon University and found himself working at his family’s fish sauce facility from June last year.

Ca, Vy’s father, has mixed feelings toward his son’s decision to go home.

“I’m so happy that my son picked up the family trade and is one step closer to my dream of catapulting fish sauce to new fame,” Ca shared.

“But I sometimes can’t help feeling sad. He has a doctorate degree, but now all he faces every day are the sauce barrels.”

Vy said he is pleased with how the actual production is going.

The academic can now master the process to generate GABA for reservoirs containing up to several metric tons of fish.

He noted the key phase is adding probiotics to the saline environment, producing enzymes and decarboxylase glutamate and converting glutamate into GABA in fish sauce.

Vy named his new line of products GABA Son My.

His extensive research also resulted in a new fish sauce for children that boosts their growth and improves their well-being by supplementing Vitamin B3, essential micronutrients, iron, and calcium.

These two new product lines, which Vy hopes users find tasty and useful, are launched alongside his father’s signature traditional ones.

With hopes to move his family’s products from local markets to the world, Vy joins hands with online trading platforms, including giants Amazon and Alibaba, that connect his products with potential consumers.

He proudly said he will launch his two new products globally after tests for micronutrients and GABA by international standards come back positive.

The academic-turned-entrepreneur hopes his work will inspire many young scientists.

“We will keep up the legacy in a novel way to benefit our home country.”

Vy said he is more than willing to share with like-minded people how to produce GABA in fish sauce.

He believes his clean fish sauce, as well as other organic Vietnamese products which meet stringent benchmarks, will fetch high prices, up to VND1-2 million (US$44-88) each liter instead of the current VND100,000 ($4.4) on global markets.

In addition to local fairs, expositions and grocery stores, his family’s products, ‘One Commune One Product’ (OCOP), which means each locality comes up with a hallmark item, now hit the shelves at supermarkets, clean produce shops across the country and advance to online trading platforms.

The doctorate holder plans to expand production so that his family’s entire output will be enriched with GABA if the global launch proves a success.

He also plans to put technological advances into more of his hometown’s iconic items so his next homecomings will not only be personal triumphs.