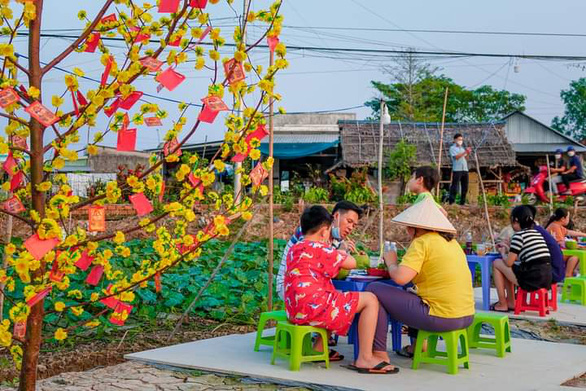 A diner wears ‘non la’ (Vietnamese conical hat) while enjoying food with her family at a vegan stall next to a paddy field in Can Tho City, Vietnam. Photo: T. Luy / Tuoi Tre

A vegan food stall next to a paddy field in Vietnam’s Mekong Delta has recently become favored by not only locals but also visitors.

Located in the Thoi An neighborhood of Thoi Thuan Ward, Thot Not District, Can Tho City, the stall sells vegan noodle dishes in the morning and vegan fried snacks in the afternoon.

What makes the venue famous is its open space, which allows diners to sit on small plastic stools right next to a paddy field while enjoying their food.

According to Tran Thi Kim Binh, the stall’s owner, she has run her business for the past three years.

However, it was not sensational until three months ago when she posted a video capturing diners enjoying their food next to the field amid the flooding season on social media.

The video quickly caught the eyes of many young people who have flocked to try a bowl of vegan noodles at such a cool place.

During the Tet holiday, which lasts from January 29 to February 6, Binh once had to close her place due to an increase in diners while there were not enough staff to serve them.

However, seeing people’s love for her business with some even traveling far from the Central Highlands city of Da Lat, Binh decided to reopen her stall on Friday after two days of closure.