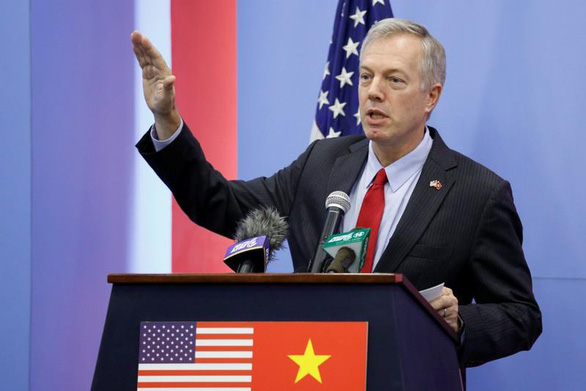 Editor’s note: The article below is written by Ted Osius, President & CEO of the U.S.-ASEAN Business Council. He was U.S. Ambassador to Vietnam from 2014 to 2017, and is the author of ‘Nothing Is Impossible: America’s Reconciliation with Vietnam’ (Rutgers University Press, October 2021). U.S. Vice President Kamala Harris visited Vietnam from August 24 to 26.

The first sitting U.S. vice president to visit Vietnam in decades, Kamala Harris showed the world that the United States can manage a crisis while chasing opportunities.

Although she fielded questions about the unfolding tragedy in Kabul, Vice President Harris remained focused on strengthening vital relationships in Southeast Asia. The Biden-Harris administration clearly views its partnership with Vietnam as significant, as the vice president’s visit followed that of Defense Secretary Lloyd Austin by only a few weeks.

Before the vice president traveled to Singapore and Hanoi, some believed that her trip was all about China. However, Vice President Harris made it very clear in each of her interactions that America’s relationship with Vietnam is intrinsically important.

Our two economies are more interconnected than ever, as U.S.-Vietnam trade has increased from almost nothing when I began working in Vietnam in 1996 to $90 billion last year.

Today, the United States is Vietnam’s second-largest trading partner, and the number-one destination for Vietnamese exports. For the United States, which seeks resilient supply chains, it matters that Vietnam is a major hub for semiconductor manufacturers, including Intel, which has its largest factory near Ho Chi Minh City.

Vietnamese and Americans are focused on responding to COVID-19 and spurring post-pandemic economic recovery. The vice president announced the U.S. will donate an additional one million doses of Pfizer vaccines to Vietnam, bringing the total donation to six million, and committed to providing 77 ultra-low temperature vaccine freezers to support distribution efforts across all 63 provinces.

This support builds on a long history of collaboration on health, which began during the SARS and HIV/AIDS epidemics and has since strengthened during the COVID-19 pandemic as Vietnam’s Ministry of Health and the U.S. Centers for Disease Control (CDC) share epidemiological data in real time.

Over the decades, our public health institutions have become trusted partners, which the vice president underscored when opening a new regional office for the CDC in Hanoi.

The vice president launched a $36 million project aimed at accelerating Vietnam’s transition to a clean, secure, and market-driven energy system, and a new Green Index will help foreign companies invest in provinces that are actively going green.

The Vietnamese government and businesses are increasingly serious about sustainability, and U.S. industry also cares deeply about these issues.

Vice President Harris also boosted efforts to preserve coastal habitats in the Mekong Delta, whose 20 million citizens depend on the mighty river for water and life-giving nutrients. Millions more throughout the region depend on Mekong farmers for rice, vegetables, and seafood.

People-to-people ties also featured prominently on the vice president’s trip. She announced that Peace Corps volunteers will begin serving in Vietnam, a signal of deepening trust between Hanoi and Washington.

Some said this would never take place but, as former U.S. Ambassador Pete Peterson once said, nothing is impossible in U.S.-Vietnam relations. Sending young Americans to teach English in Vietnam will help us understand the country better. Young Vietnamese are eager to learn about America, too, and 30,000 Vietnamese students come to study in the United States each year, contributing nearly $1 billion to the U.S. economy.

The vice president witnessed the signing of a 99-year lease for a new U.S. embassy in Hanoi, an action which addressed a long-standing concern of the United States.

The security relationship continues to move forward at a slow but steady pace. Vice President Harris confirmed America’s support for Vietnam and its ASEAN neighbors on freedom of navigation in the [East Vietnam Sea], saying, “The U.S. stands with our allies and partners in the face of threats.”

She discussed possibly providing a third U.S. Coast Guard high-endurance cutter to Vietnam, subject to Congressional approval, and she committed to deeper collaboration on cyber-security.

Trade irritants remain, though progress was made on facilitating the export of U.S. agricultural products to the Vietnamese market. Vietnam has high aspirations for its digital economy, and the U.S. could provide a huge boost to businesses on both sides of the Pacific by negotiating a digital trade agreement with Vietnam and other Indo-Pacific nations to create common rules for the most dynamic part of the global economy.

Some have focused on the label given to the U.S.-Vietnam partnership. It really doesn’t matter what we call it – what matters is the work we do together on what matters to both countries, the region, and the world. Ultimately, the vice president’s trip continued the long process of showing respect and building trust and reconciliation between two former adversaries who are now good friends.