US hospital ship arrives in Vietnam for Pacific Partnership 2022 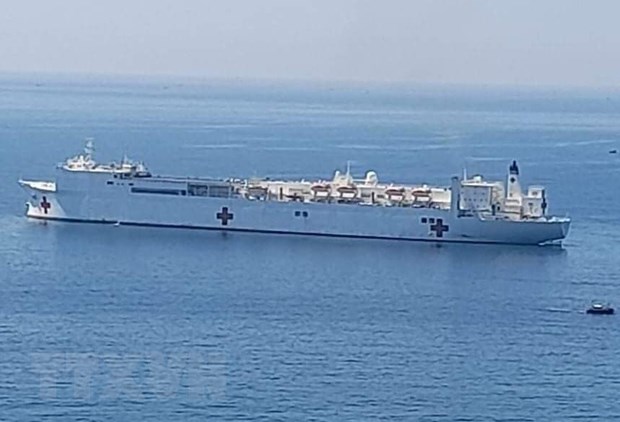 The ship’s arrival, at the province’s Vung Ro Port on Sunday, was announced by the U.S. Consulate General in Ho Chi Minh City in its media release the same day.

The PP22, now in its 17th year, is the largest annual multinational mission for disaster relief preparedness and humanitarian assistance in the Indo-Pacific region.

In Vietnam, the PP22 group includes representatives from Australia, Japan, the UK, and the US, who will cooperate with Vietnamese partners in a number of activities and projects to benefit local people.

While in Phu Yen, they will provide tailored medical and dental care for locals, construct new buildings for some elementary schools, and exchange expertise related to disaster response processes and procedures, the consulate general said.

“This is a cooperation that builds trust among nations and helps us prepare so we can work together efficiently if we are ever called upon to respond to a natural disaster or hazard of any kind,” the captain said.

He also said he expects to exchange experience and expertise with the Vietnamese hosts and other partner nations in order to “collectively build skills that will last well after the mission.”

An opening ceremony for the PP22 mission will be held at Nghinh Phong Square in Tuy Hoa City of Phu Yen on Monday evening.

On this occasion, the U.S. Pacific Fleet Band will perform with Phu Yen’s well-known Sao Bien Band and musicians from Australia and Japan to celebrate the event, according to a notice posted on the consulate general’s verified Facebook page on Monday.

“We will livestream the performance on the U.S. Consulate General – Ho Chi Minh City and U.S. Embassy in Hanoi Facebook pages. Let’s jam with the musicians,” the notice said.

Mercy is a 1,000-bed hospital ship commissioned in 1986, with a military cadre crew of approximately eight officers and 53 enlisted personnel and a civilian mariner cadre crew of about 15 personnel while in a Reduced Operating Status (ROS), as shown on the MSC’s website.

Along with USNS Comfort, Mercy provides mobile, acute surgical medical facilities when called upon to the U.S. military, and hospital services to support U.S. disaster relief and humanitarian operations worldwide, the MSC said.