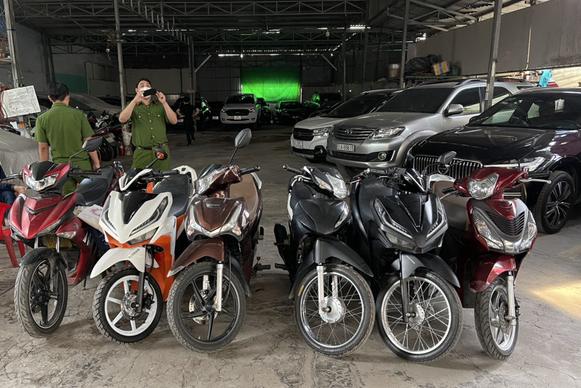 Police in Binh Thanh District, Ho Chi Minh City said on Wednesday that they had successfully broken down two theft rings in the district, including one that often stole motorbikes at convenient stores, cafés, and people’s houses, and the other that resold them in Cambodia.

The theft rings have been rampant since mid-2021, according to police officers.

Criminal detectives arrested Bui Dinh Thach, 27, living in Go Vap District, and Nguyen Trieu Long Nhan, 25, living in Binh Duong Province when both were riding a motorbike stolen from a café on No Trang Long Street in Binh Thanh District on January 25.

Based on the testimony of Thach and Nhan, officers continued to arrest Truong Van Phu, 28, living in Binh Thanh District and Nguyen Van Hau, 30, living in District 1.

Police officers determined that Phu and Hau, both of whom had had many previous convictions for property theft, were the main suspects in the case.

The two confessed to stealing the aforementioned motorbike and selling it to Thach for VND7 million (US$306).

In addition to this case, the two also confessed to committing six previous motorbike thefts in Binh Thanh and other districts.

The Binh Thanh District police thus arrested and initiated legal proceedings against Phu and Hau on charges of property theft and Thach and Nhan for the investigation of possession of property obtained by crime.

Officers also confiscated eleven motorcycles and a large number of tools used during their thefts.

The couple stole a motorbike parked in front of a 7 Eleven store in Ward 22 of the district on February 21 before reselling it to Dinh Cong Nghia Trong, another 27-year-old local, for VND13 million ($569).

Nghia then offered the stolen vehicle to Dang Van Tuan, 28, and Vo Hoang Thuan, 28, both hailing from Tay Ninh Province.

The two sides agreed on a deal of VND16 million ($700) for the said motorbike, in addition to VND3 million ($131) for a Honda Dream scooter.

After Tuan received and brought the motorbike from Ho Chi Minh City to Tay Ninh, Thuan rode it to Cambodia, where he resold it to someone named Cat for $880.