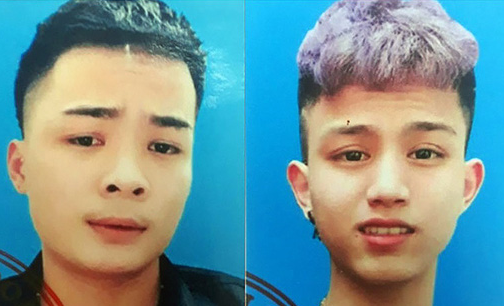 Do Han and Do Van Thom are shown in this photo provided by Vietnam’s Ministry of National Defense.

Vietnam’s Ministry of National Defense has issued an arrest warrant for two men for allegedly beating a military officer to death in Hanoi last October.

The criminal investigation agency under the Ministry of National Defense confirmed on Monday it had initiated legal proceedings against Do Han and Do Van Thom, both 20, for murder.

Han and Thom, who reside in Chuong My District, Hanoi, are now being sought by police.

Investigators are also searching for the witness in the case – 21-year-old Nguyen Hoai Nam from northern Hoa Binh Province – to facilitate the investigation.

People who know the whereabouts of Han, Thom, and Nam are requested to contact local authorities or the investigators via 0989.274.098.

Preliminary information showed that T.L., who resided in Quoc Oai District, Hanoi, was riding his motorbike in Chuong My District at 12:00 am on October 24, 2021, when an automobile forced him to pull over.

About ten men got out of the vehicle and started attacking L. with weapons.

Local residents later took the victim to the hospital for emergency treatment, but he succumbed to his serious injuries on the same day.

As L. was a military officer, the case was handed over to the criminal investigation agency under the Ministry of National Defense.