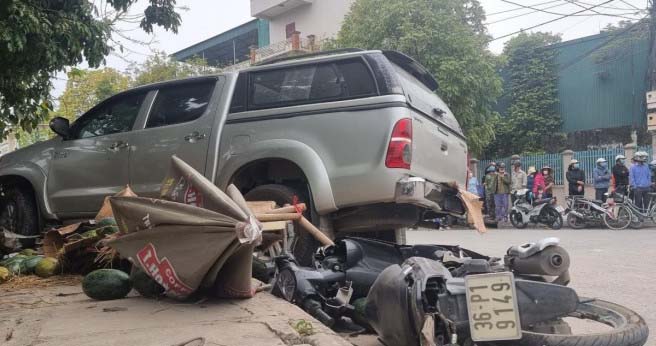 The site of the crash in Thanh Hoa Province, Vietnam, March 27, 2022 in this photo supplied by a local resident

Two people were killed and another injured after an automobile carrying local fishery officials collided with a motorbike and crashed into a fruit stall in Thanh Hoa Province, north-central Vietnam on Sunday.

The accident took place along a street in An Hung Ward, Thanh Hoa City at around 7:15 am, the provincial Department of Public Security confirmed later the same day.

The car, driven by 39-year-old Nguyen Van Thong, was traveling on the street when it slammed into a motorbike steered by a 66-year-old man.

The automobile then lost control and crashed into a fruit stall on the side of the road.

Two sellers at the fruit stall were killed on the spot, while the motorbike driver was injured and hospitalized.

Thong reported the case to local police following the incident.

Preliminary information showed that the car driver was not under the influence of alcohol.

The Thanh Hoa Department of Agriculture and Rural Development confirmed on the same day that the automobile was carrying Nguyen Duc Cuong, director of the province’s fishery sub-department and some other officials of the agency.

They were traveling to Tho Xuan airport in the namesake district for a business trip.

Officials from the provincial agriculture department and fishery sub-department have extended their condolences to the families of the deceased victims and visited the injured motorcyclist at the hospital.

They are also coordinating with local police to determine the cause of the accident.