Some parts of an agreement signed with a foreign investor have pushed Vietnam into a dilemma. 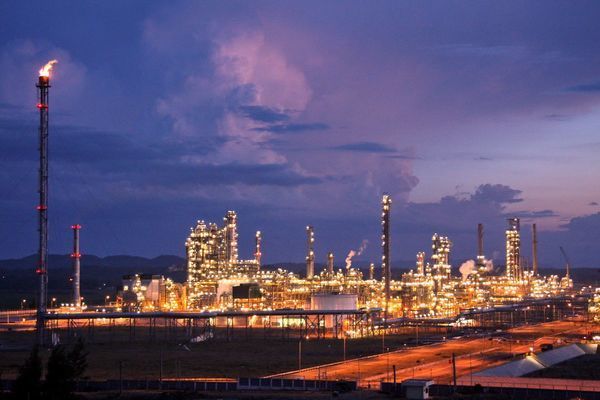 It had an approved initial investment capital of $6.1 billion, but the figure later rose to $9.2 billion.

On November 5, 2012, the Prime Minister gave an instruction in Notice 367/TB-VPCP of the Government Office about the results of negotiations on the GGU (Government Guarantee and Undertaking) for the project, which says that Vietnam agrees with the FPOA (Fuel Products Offtake Agreement) principle. And PetroVietnam would be responsible for the outlet for the products.

PetroVietnam, on behalf of the Vietnamese government, implements the commitments on preferential import tariffs of refined products that the government commits to the project.

With these commitments, PetroVietnam has to buy all the products put out by Nghi Son.

Under FPOPA, the selling prices of Nghi Son’s products are equal to imported products.

Meanwhile, Vietnam has signed many multilateral and bilateral free trade agreements (FTAs). Import tariffs applied to domestic oil refineries turn out to be higher than preferential tariffs under FTAs. In theory, the selling prices of Nghi Son’s products are always higher than imports.

However, if buying Nghi Son products, buyers can enjoy some advantages: they can make payment in Vietnam dong and don’t have to pay a high transport fee. These are factors that petroleum distributors may consider when buying Nghi Son’s products.

In a report to the Prime Minister dated February 3, 2016, the Ministry of Industry and Trade (MOIT) warned that it would be difficult to sell Nghi Son’s products as they are less competitive than imports. Petroleum distributors tended to increase imports from the markets which could enjoy preferential tariffs, such as South Korea, since the products were cheaper.

As such, Vietnam has to buy all the products to be put out by Nghi Son, while under current regulations, petrol distributors don’t have to buy products from domestic oil refineries. This has caused a headache to management agencies.

MOIT then warned that if the Government did not tightly control petrol imports and change some policies related to petroleum trade, it would be very risky to implement FPOA because petroleum distributors preferred imports than domestic products.

At that time, some experts suggested that MOIT controlled imports with a quota scheme, i.e the ministry would grant quotas to import products after it is sure that the products of domestic oil refineries have sold.

The solution then faced strong opposition from ministries and branches which said that the quota scheme will break WTO (World Trade Organization) rules and FTAs.

However, everything has been going smoothly since then and MOIT always calculates the import volume carefully to be sure that all Nghi Son’s products are salable.

Under GGU and FPOA, Nghi Son can apply the wholesale price at the factory gate which is the import price plus the import tax of 7 percent for refined products (5 percent for LPG and 3 percent for petrochemical products. The preferences will be applied for 10 years until 2027).

During that period, if Vietnam imposes lower import tariffs, the Government promises that PetroVietnam will pay Nghi Son to cover the gap between the actual import tariffs and the 7 percent tax, applied to refined products (5 percent for LPG and 3 percent for petrochemical products), in all cases of Nghi Son selling its products in the domestic market, including sale to PetroVietnam or other buyers.

Under the Government’s instruction, on January 15, 2013, PetroVietnam and NSRP signed an FPOA, under which, preferential import tariffs for each product are included in the pricing formula.

This means that imports from South Korea would be cheaper than products provided by domestic oil refineries (Nghi Son and Dun gQuat). The preferential tariffs applied to South Korean imports are lower than tariffs applied to Nghi Son. Therefore, PetroVietnam has to offset the tax gap for Nghi Son’s oil products.

Meanwhile, the currently applied import tariff on petrol is 20 percent, which is higher than the 7 percent applied to Nghi Son, so, PetroVietnam doesn’t have to offset the tax gap.

As such, during 10 years, PetroVietnam will have to spend billions of dollars to offset the tax gap so that the selling prices of domestic oil refineries can be competitive with imports.

In 2016, PetroVietnam estimated that the amount of money it has to pay to NSRP to fulfill the Government’s commitments is VND75 trillion.

Analysts say that profit from the capital contributed by PetroVietnam to the project (25 percent) would be much lower than the amount of money it has to pay to offset the tax gap.

Vietnam has two oil refineries, Dung Quat and Nghi Son. Every year Vietnam imports millions of tons of crude oil while still exporting crude oil. What is the reason?