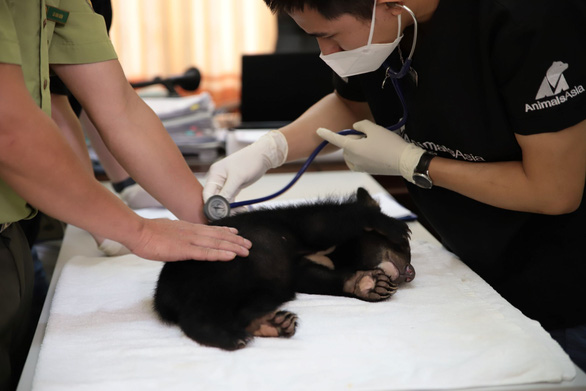 This image shows an Asian black bear cub being examined by a veterinarian after it was found in a vegetable farm in Dien Bien Province, northern Vietnam, on June 2, 2022. Photo: Animals Asia

Two endangered Asian black bears, including one having been raised in captivity for 22 years, have been handed to Vietnam’s national bear rescue facility recently.

Nguyen Van Huong volunteered to give the bear to the center for humanitarian purposes after having legally raised the animal since 2000, the provincial forest protection department reported.

Huong’s wildlife farm has been properly certified in accordance with applicable regulations, and it has performed no bile extraction from the bear during the past 22 years of captive breeding, according to the Vietnam News Agency.

A chip has been implanted into the bear for management since 2005 as required by law, the department said.

The agency had previously to encourage Huong to leave his bear in the care of the VBRC as it belongs to an endangered, rare, and precious wildlife species that needs to be protected under a decree issued by the central government in 2019.

The animal handover was highly appreciated as it contributed to wildlife conservation as well as biodiversity preservation in Vietnam, the provincial forest protection department commented.

On Thursday, the VBRC received another Asian black bear through its connections with Animals Asia and forest rangers of northern Dien Bien Province.

The female bear cub, weighing five kilograms, was rescued after it was detected in a local vegetable farm, the provincial forest protection department said.

The baby animal, which was relatively healthy when being found, has been named ‘Tre’ (Bamboo).

The agency has cooperated with Animals Asia in giving the cub necessary care and nutrition to ensure its good health.

Both the bears have been taken to the VBRC, located in Tam Dao National Park in northern Vinh Phuc Province, which is the home to 192 sun bears and Asian black bears, according to the Vietnam News Agency.

Since 1994, Vietnam has been an official member of the Convention on International Trade in Endangered Species of Wild Fauna and Flora (CITES), which is a multilateral treaty that protects endangered plants and animals.