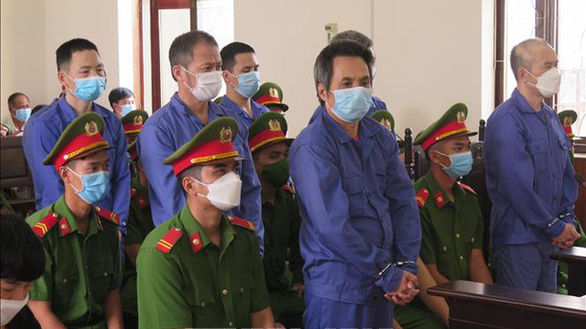 This image shows some of the seven defendants at their trial at the People’s Court of Kon Tum Province in Vietnam, April 16, 2022. Photo: Vietnam News Agency

A Vietnam court has condemned two Chinese men to death and another to life imprisonment for illicitly producing methamphetamine along with five other accomplices in the country three years ago.

After five days of trial, the People’s Court of Kon Tum Province in the Central Highlands region on Saturday gave the death penalty to Cao Zi Li and Song Jian Huang, both 59, and a life sentence to Yang Yuan De, 58, on charges of ‘Illegal production of narcotic substances,’ under Vietnam’s Penal Code, the Vietnam News Agency reported.

Five other defendants, including four Chinese and one Vietnamese of Chinese origin, got sentences from 34 months to 20 years in prison for the same offense.

This eight-member gang was found organizing the illegal production of drugs and drug precursors in Kon Tum and south-central Binh Dinh Province for about five months from March 2019, according to the indictment.

Police officers also confiscated machinery, equipment, and tools having been used for drug production, along with related documents.

Investigation showed that Cao was the kingpin, who was aided actively by Song, while the others acted under the direction of the two men.

At the hearing, Cao and some other defendants pleaded not guilty, arguing that they stayed in Vietnam only to produce insecticides.

The trial panel, however, rejected their statements and affirmed that the collected evidence and their testimonies were enough to convict them.

As the masterminds, Cao and Song deserved to be given the death penalty, the court said, adding that all the exhibits in the case would be destructed as prescribed by law.

Before arriving in Vietnam to churn out drugs, Cao was released on parole in China in October 2017 after serving 15 years of his life sentence for drug trafficking committed in 2002, national radio station Voice of Vietnam cited the court as saying.