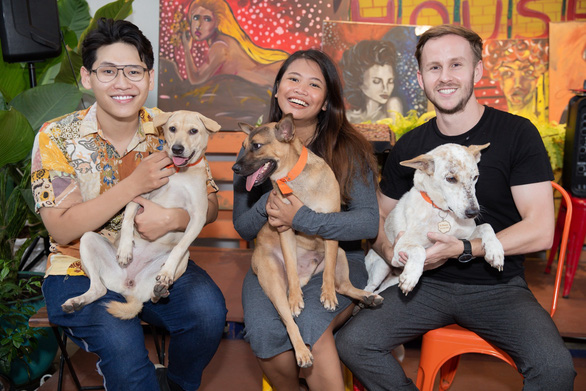 Three friends in Ho Chi Minh City are stepping up to reunite dozens of pets in the city with owners stranded in other provinces and cities due to COVID-19 restrictions.

The Vietnam Cross-Country Rescue Caravan, a bus that brings stranded pets in Ho Chi Minh City to owners in other provinces and cities, wrapped up its six-day journey in late October.

On their most recent journey, the group traveled from Ho Chi Minh City to Lam Dong, Buon Ma Thuot, and Quang Ngai before reaching Hanoi, stopping along the way to drop off pets to their stranded owners.

Two drivers took turns behind the wheel while a volunteer and Marcelino took care of the animals.

“At first, we just shared an idea to rescue unattended pets on Facebook,” said Thien.

“The idea blew up and received a lot of community support which gave rise to the entire project.”

After they announced their plan, the group received a flood of messages from pet owners who had left Ho Chi Minh City at the onset of the most recent outbreak but were unable to bring their pets with them.

The trio then pored through the messages to find the individuals who were most in need before outlining a route across Vietnam to reunite the pets with their owners.

During the trip, the vehicle pulled over every three hours for Marcelino to walk the dogs and check on their hygiene.

Overall, the six-day trip was a success, but there were still many heartbreaking stories along the way.

There was one situation where the owner of three dogs left Ho Chi Minh City for Lam Dong Province’s Da Lat City a few months prior but had been unable to return due to COVID-19 restrictions, according to Thien.

As pet care services had been banned in the city, the owner was left with no way to ensure care for the dogs aside from asking delivery drivers to throw pet food into the house.

“When we went to pick up the dogs, two of the three had died,” Thien recalled.

“We brought the third to the vet’s where he was discovered to have lice and problems with his skin, liver, kidneys, and digestive system.”

The group brought the dog to R-House, where he could be cared for until he could be reunited with his owner in Da Lat.

A safe haven for pets

Marcelino and Ward moved to Ho Chi Minh City in 2019.

Shortly after arriving, they visited an animal shelter to adopt a dog but were overwhelmed by the sheer number of abandoned dogs and cats at the facility.

Deciding to take matters into their own hands, the two enlisted help from Thien and founded Pawfect Match, a social initiative that helps provide shelter for local animals.

Before prospective owners are matched with a pet, they must answer 50 questions.

Pawfect Match then uses the answers to understand who the hopeful owners are and whether they will be able to provide a suitable forever home for a pet.

“The most important thing is to find a suitable owner for each pet,” Ward said.

According to Thien, it is common for animals in shelters to develop distrust in people.

“Many of them are beaten, abandoned, or abused,” Thien said.

“Some even have their legs cut off.

“Many pets from shelters hide when they first arrive at [R-House].”

R-House helps these animals regain trust in humans by holding regular social events which introduce them to its vegan diners and increase their chances of getting adopted.

“After a pet gets adopted, we take in a new one from a shelter,” Thien explained.

“Hundreds of animals, including ones that were left at the shelter for many years, have found new owners through our restaurant.”

Since the pandemic began, Thien, Ward, and Marcelino have strived to help as many dogs and cats as possible, with the goal of leaving none behind.

“There are many things in life that hold us back, but love is what pushes us forward,” Ward said.

“Thinking of an animal’s reunion with its owner is what motivates us to try harder.”