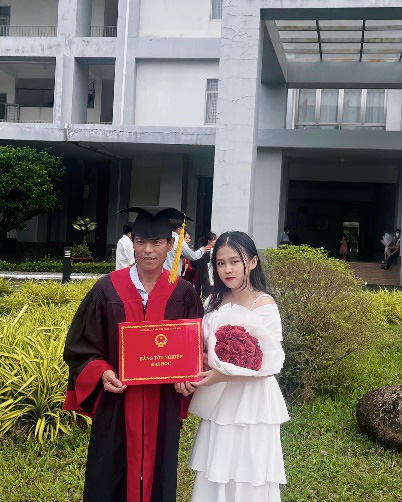 Her father in graduation gown takes a photo with Le Thi Kim Thy.

Social media users are sharing a video of a new university graduate putting her graduation gown on her father, who works as a mason, on her graduation day.

This is a touching story moving many to tears.

Le Thi Kim Thy, a 22-year-old resident of Vinh Long Province in the Mekong Delta, revealed that she was the new graduate in the widely-watched clip.

On April 15, her family came to her graduation ceremony and took commemorative photos on such an important day because she graduated from Can Tho University with a degree in economics.

She hugged her father after meeting him, and then took off her mortar board and graduation gown to put them on her father.

The father was proud and happy about her action. He felt awkward and hurriedly wiped a tear from his eye, touching many viewers.

“My father has been working hard and sacrificed everything for me, so I decided to share my success with him. My father deserves it.

“At that time, he was smiling and said that he did not go to school, but still wore a graduation gown. I do know that he is very happy,” Thy said.

When the father was young, he just finished the second grade and could not attend higher grades due to financial difficulties.

As such, he dropped out of school to go work and earn money to support his family.

Knowing his hardship, Thy was determined and tried her best to study well to make her his pride. Her simple action is a way to express her gratitude to her father, according to Thy.

For Thy, her father is mild and does love his children, but seldom shows his feelings.

Her parents are manual laborers. Though her father is a mason and her mother is a factory worker, they always support and take care of Thy in her schooling process.

Thy’s elder sister took on a job after finishing high school, while their youngest child is in grade six.

Since her parents and elder sister work hard and make sacrifices, Thy landed several part-time jobs as a salesperson and a waitress and did her best to win scholarships.

“My friend captured the moment. Initially, I just wanted to store the clip as a virtual keepsake, but when the clip went viral on social media, I realized that many people were unlucky as their parents could not attend their graduation ceremony and accompany them through their life.”

“I hope that those whose parents are still alive will cherish each moment of having them by their side and bring happiness to their parents,” Thy said.

“I would like to say thank you to my parents again for their nurturing and sacrificing everything for their children. I will try my best to bring the best things to them,” she added.

Thy’s father, Le Minh Duong, aged 49, told Tuoi Tre (Youth) newspaper that after the clip went viral, his daughter called him and boasted about the popularity of the moment.

“I am very pleased, but feel a little embarrassed due to being so well-known. Parents’ happiness is witnessing their children grow up. Thy is a warm-hearted person and her action surprised me a lot,” says Duong.

The viewers have sent congratulations to Thy and praised her for filial affection.

The Hanh Coi account writes on Facebook that “Behind the graduation gown is the sweat and tears of parents.”

Another Facebook user, Le Tan, shares “I am moved by the moment and feel a little envious of her as she has firm support. Wish you success in your life.”

The social media account of the Can Tho University, where Thy studied, writes that: “So grateful to parents for their silent sacrifices to give wings to the dreams of generations of students.”