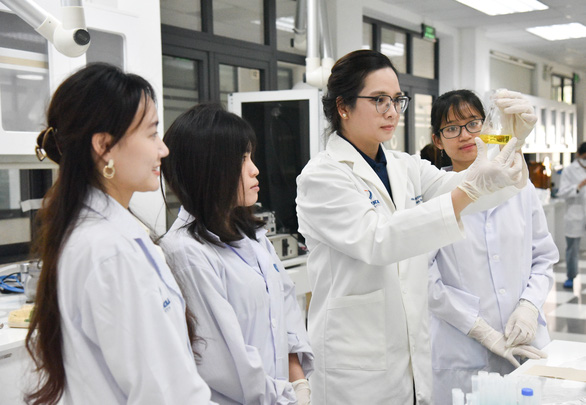 Dr. Do Van Khanh instructs students to conduct an experiment in a lab at Phenikaa University. Photo: P.K.A / Tuoi Tre

Dr. Do Van Khanh, aged 33, is among the top 30 young scientists in the U.S. Now she has published more impressive studies regarding the development of early diagnostic tools for Alzheimer’s and other common diseases in Vietnam.

After receiving the National Institute of Health (NIH) award for the top 30 young scientists in neuroscience in the U.S. in 2020, Dr. Khanh was invited by the NIH to work and received research support from the institute’s development fund.

However, she opted to return to Vietnam to teach and research in the hope of forming her own research group on lipidomics and its applications in the country.

Now she has become the leader of a potential research group at Phenikaa University.

Early diagnosis of Alzheimer’s based on eye retina

Khanh returned to Vietnam in April last year when the fourth wave of COVID-19 began hitting the country.

Her research on Alzheimer’s started with a study about early detection of the disease based on abnormalities found in the retinal layer of the eye.

The results of this study were published in the Proceedings of the National Academy of Sciences of the United States of America (PNAS), one of the oldest and most prestigious scientific journals in the U.S.

She also carried out research in collaboration with Sweden’s Karolinska Institute, a global leading medical research institute that is responsible for setting up a council to select scientists who win the Nobel Prize in Medicine annually.

One impressive study undertaken by Khanh is the use of bioactive lipids (lipid mediators) derived from DHA (Docosahexaenoic Acid) as nasal drops to help slow the progression of Alzheimer’s disease.

This method is believed to be a widely applicable therapy as it does not invade the body of the patient.

The results of this study were published in the Nature – Communications Biology scientific journal in March this year.

This study was published in the Cellular and Molecular Neurobiology journal last month.

Professor Bazan, Khanh’s mentor, said: “This tool helps detect the risk of the disease 20-30 years before the symptoms of memory loss develop. Thanks to that, treatment therapies could be timely provided to help slow down the progression of the disease, prolong the lifespan of the patient, especially help them retain the best memories with their loved ones”.

“I got back to Vietnam during the peak of the pandemic, so when I saw Phenikaa University posting a job advertisement, I spent time researching about the school and decided to apply,” she said.

“With the support of the Faculty of Medicine, the Department of Science and Technology, and colleagues, I finished a project to develop a research team, proposed to build a laboratory, and connected with international scientists to create new avenues of research,” Khanh continued.

Studying and living in the U.S. for nearly a decade, Khanh wishes to return to Vietnam to share knowledge she has acquired with the younger generation.

Aside from her research goals, she also teaches at the university’s Faculty of Medicine and other faculties under the health sciences department.

Prof. Dr. Pham Thanh Huy, principal of Phenikaa University, said he was impressed when reading Do Van Khanh’s profile and the research results she had achieved during her time studying and researching in the U.S.

“I shared with Khanh about obstacles that she could face when becoming the first person to open up a whole new avenue of research in the country, and I was surprised when she decided very quickly and determinedly to accept these challenges,” Huy said.

Prioritizing research on early detection of diseases for Vietnamese

Upon returning home, Khanh realized that the number of patients dying of cancer and heart disease in Vietnam every year was on the rise.

Therefore, she aspired to be able to develop and apply early diagnosis tools for the two terminal illnesses as soon as possible.

“In the U.S., I attended many conferences on lipids and found that there has been a lot of research done.

“As a pioneer, I hope to be able to connect with leading cancer and cardiovascular researchers in the U.S., Vietnamese scientists at home and abroad to support and join hands in the upcoming projects in my homeland,” Khanh said.

Apart from that, Khanh and her colleagues studied the development of models on disease risk prediction and early diagnosis of these diseases by linking unchangeable factors (genomics) and temporal factors (lipidomisc) to optimize and improve the accuracy of the models.

Further, traditional analytical methods such as biochemistry, hematology and medical imaging will also be integrated to evaluate this disease prediction model.

“I hope to inspire students with the learning spirit and passion for research, especially female students, so that they can be more confident and proactively participate in scientific research,” said Dr. Do Van Khanh.