Chairman of the National Assembly Vuong Dinh Hue and a high-ranking delegation of the Vietnamese legislature arrived at Incheon International Airport in Seoul on December 12 afternoon, 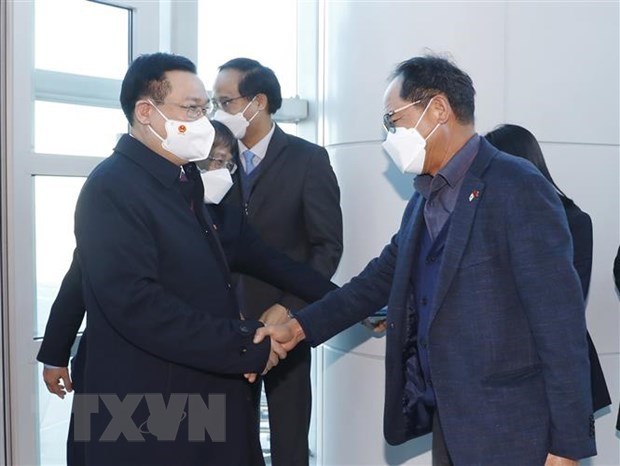 
Chairman of the National Assembly Vuong Dinh Hue and a high-ranking delegation of the Vietnamese legislature arrived at Incheon International Airport in Seoul on December 12 afternoon, beginning their official visit to the Republic of Korea (RoK) at the invitation of Speaker of the Korean NA Park Byeong-seug.

Hue has been accompanied by Deputy Prime Minister Le Minh Khai; Secretary General of the NA and Head of the NA Office Bui Van Cuong; Chairman of the NA Committee for External Relations Vu Hai Ha; and Head of the NA Standing Committee’s Board for Deputy Affairs and President of the Vietnam-RoK Friendship Association Nguyen Thi Thanh.

The Vietnamese delegation was welcomed at the airport by Vietnamese Ambassador to the RoK Nguyen Vu Tung, the Vietnamese Embassy’s staff and Vice President of the RoK-Vietnam Friendship Parliamentarians’ Group Suh Jung-sook.

Hue’s official visit to the RoK is of great political importance as he had been elected Chairman of the Vietnamese NA earlier this year. This is the first visit to the RoK by a senior leader of Vietnam after two years since the COVID-19 pandemic broke out. It is expected to further deepen and create new momentum for the Vietnam-RoK strategic cooperative partnership, towards the 30th founding anniversary of diplomatic relations in 2022.

Since the establishment of diplomatic ties on December 22, 1992, the bilateral relationship has been developing rapidly and obtained remarkable achievements in all fields such as politics-diplomacy, security-defence, economy and culture, and in both bilateral and multilateral frameworks. The RoK has become one of the most important partners of Vietnam.

Relations between the parliaments of Vietnam and the RoK have been strengthened and fruitfully developed. During then NA Chairman Nguyen Sinh Hung’s visit to the RoK in July 2013, the two legislatures signed a cooperation agreement.

Within the framework of the ongoing visit, NA Chairman Vuong Dinh Hue will hold talks with Speaker of the NA Park Byeong-seug and meet with Prime Minister Kim Boo-kyum and other leaders of the RoK.

He will receive leaders of a number of Korean friendship organisations and economic groups, meet with the Vietnamese community working and studying in the RoK, and listen to the RoK’s experience in building an economic recovery strategy in the post-COVID-19 pandemic period.

In particular, during the visit, representatives of the two governments will sign a bilateral agreement on social insurance which is a very important pact between Vietnam and the RoK. It is expected that once the agreement comes into effect, the social insurance benefits of Vietnamese employees who work for a definite time in the RoK as well as Korean employees working in Vietnam will be guaranteed by the laws of both countries. The agreement will contribute to ensuring social security and creating more favourable conditions for workers in getting access to employment opportunities.

Chairman of the National Assembly Vuong Dinh Hue and a high-ranking delegation of the Vietnamese NA left Hanoi on December 12 morning for official visits to the Republic of Korea (RoK) and India.