Three trips, one message: Vietnamese ready to protect the fatherland 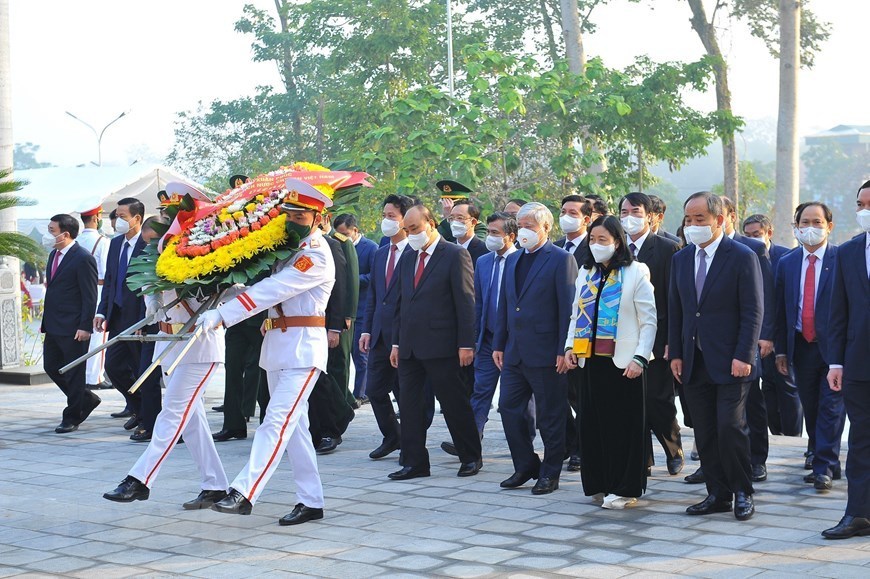 The first business trip was conducted by President Nguyen Xuan Phuc to attend the 130th anniversary of the establishment of Ha Giang province.

On December 8, 2021, Phuc came to offer incense and flowers to pay tribute to heroes and martyrs at Vi Xuyen National Martyrs Cemetery as part of the working trip.

Vi Xuyen was a fierce battlefield against Chinese invaders throughout 10 years (1979-1989). The place is considered the ‘lime kiln of the century’, but Vietnamese soldiers never flinched. The men at the age of 18-20 struggled to protect every inch of the fatherland.

At Vi Xuyen Cemetery, there is a stone stele engraved with nine words ‘Song bam da, chet hoa da, thanh bat tu’ (living on the stone, turning stone when dying, becoming immortal). The inscription was engraved on the buttocks of Martyr Nguyen Viet Ninh, a Muong ethnic minority man from Minh Hoa, Yen Lap of Phu Tho province. This was also the oath of all the fearless combatants on the land.

Earlier this year, at Vi Xuyen National Martyr Cemetery, where there exist 1,850 graves of martyrs and a mass grave of martyrs, people gathered, including 1,600 martyrs from all provinces of the country who heroically fought and sacrificed in the battle to protect the northern border area. In Ha Giang, as many as 2,000 martyrs still have not been found. The work of restoring, expanding and gathering the remains of martyrs who died in the struggle to protect the northern border at ViXuyen cemetery is still being carried out.

One month later, on January 26, 2022, during his business trip to Quang Ninh, Prime Minister Pham Minh Chinh came to Po Hen Memorial Site in Hai Son Commune of Mong Cai to offer incense to commemorate the heroes and martyrs who sacrificed in the struggle to protect the northern border area in February 1979.

This place marks the brave fighting and sacrifices of officers and soldiers of the Police Station No 209, officers of Hai Son agro-forestry plantation, and employees of the trade sector with many unforgettable memories.

Senior Sergeant Doan Tien Phuc, before his death, tried to bury a bag of secret documents. Deputy head of the station Do Si Hoa replied to the enemy that “Our troops do not know how to surrender”; Hoang Thi Hong Chiem, a militia member, together with her boyfriend – Senior Sergeant Bui Anh Luong – fought side by side fought to the last.

All the stories about the 86 cadres and soldiers who together struggled to protect the sovereignty of the fatherland are related on the stele of the PoHen memorial site.

Visiting the memorial site, the Prime Minister affirmed that every citizen is a soldier who protects the independence, sovereignty and territorial integrity of the country.

The trip attracted the attention of the public as this was the first time a head of the Government offered incense to commemorate and pay tribute to the martyrs at Gac Ma Memorial Site in Cam Hai Dong commune in Cam Lam district.

The trip took place just two days before the 34th anniversary of China’s illegal use of force to occupy the submerged reef of Gac Ma (Johnson South Reef), belonging to the Truong Sa (Spratly) archipelago of Vietnam.

The Prime Minister said that the 64 soldiers of the Vietnam People’s Navy who bravely and selflessly defended the sacred sovereignty of the Fatherland are shining examples of revolutionary heroism, embellishing the heroic tradition of the Vietnamese nation.

During the working session with the Standing Committee of Khanh Hoa Provincial Party Committee, the PM emphasised the task of building Truong Sa island district into an economic, cultural and social center of the country, a solid stronghold protecting the country’s sovereignty over sea and islands.

The recent trips to offer incense and lay wreaths to commemorate heroes and martyrs who died in the fight to protect the northern border in February 1979 and the battle on Gac Ma on March 14, 1988 of President Nguyen Xuan Phuc and Prime Minister Pham Minh Chinh and other senior leaders have much significance and responded to people’s thoughts and feelings about historic events.

The heroic years and months in the nation’s history of protecting the country will never be forgotten. Vietnamese people remember historic events to learn lessons about the fighting against aggressors and defending the country in modern days. They remember the pain so as to value peace. The memory of Vi Xuyen, Po Hen and Gac Ma will never be erased from the mind of Vietnamese citizens.

Respecting history is the best way for us to educate the next generations and teach them that ‘when you eat a fruit, think of the man who planted the tree’, so that they live with higher responsibility and, in all situations, continue the heroic tradition of the forefathers to protect every inch of the sacred land and the integrity of the country’s sovereignty over seas and islands.

Colonel Nguyen Van Khanh, former Deputy Chief of Staff of Operations of the Engineers Brigade No 83, says that young people mustn’t forget the 64 fallen soldiers who protected the sovereignty of the fatherland.