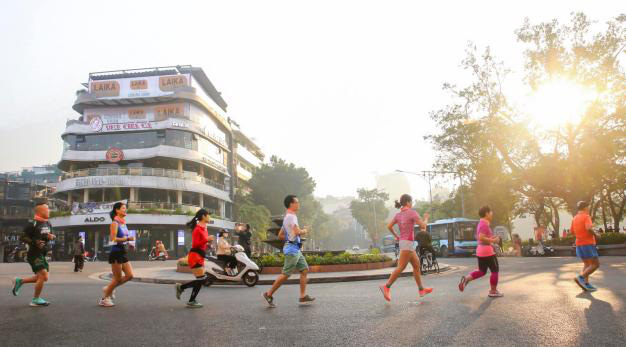 Nguyen Dang Viet (center) runs with his peers in Hanoi.

A runner in Hanoi is capturing attention from netizens across Vietnam thanks to his unique running routes that draw out gorgeous imagery.

Nguyen Dang Viet, a 36-year-old office worker in Hanoi, is well known in the country’s running community because of the hundreds of pictures he has drawn using nothing more than his own two feet and a fitness app.

Viet’s creative running routes depict images such as an eagle, a rhino, the shape of Vietnam, and a ferryman – a symbol in Vietnam meant to honor teachers by comparing teaching to carrying a group of people across a river.

What makes his imagery so unique is that it is not created with pens and papers.

Instead, the images are drawn with his own two feet as a GPS tracker on a fitness app keeps a record of his running route.

Viet never set out to create art with his runs.

In fact, before he became an ‘artist,’ he often quit in the middle of a workout.

His turning point came when he noticed one of his friends had mapped out a running route that looked like a mouse.

Inspired, Viet set about running his friend’s mouse route before embarking on his own artistic journey to create ‘running art.’

After a year turning his steps into art, Viet’s oeuvre boasts 30 completed illustrations and 30 more he has already mapped out to run in the future.

“Whenever I see a route that could form an image, I take a screenshot and plan the route on my phone,” Viet said.

His most complicated drawing – the Buddha meditating under the Bodhi tree – involved running almost 42 kilometers over eight hours to complete.

Adding to the pressure is the fact that a single wrong turn can ruin an entire piece.

Viet runs every other day, usually in the early morning.

His daily routine includes a 5:00 am wake-up, warm-ups, and a 30- to 40-minute run before helping his children get ready for school.

Occasionally he runs into dead ends and forbidden entrances, but he is able to prevent such obstacles from ruinning his images by pausing his fitness app and taking any necessary detours.

If a detour is too long, he takes a motorbike taxi.

All the running he has done over the past year has improved his health, according to Viet.

His blood pressure has stabilized, he no longer feels consistently fatigued, and he has noticed a drop in his belly fat.

His passion for creating ‘running art’ has also helped him make many new friends and explore the streets and alleys of Hanoi.

Viet has created a compilation of his artistic routes for sharing among the running community so that everyone can try them.

“I hope people pay attention to their health,” he said.

“Find the motivation to put on your shoes and run.

“I found mine through drawing pictures.”