The good worker in the digital era

Truong The Dieu has gained praiseworthy achievements in recent years: he won a silver medal at WorldSkills 2019, got a Second-class Labor Medal, and became a Vietnamese Outstanding Young Face and Vietnam Vocational Skills Ambassador 2021. 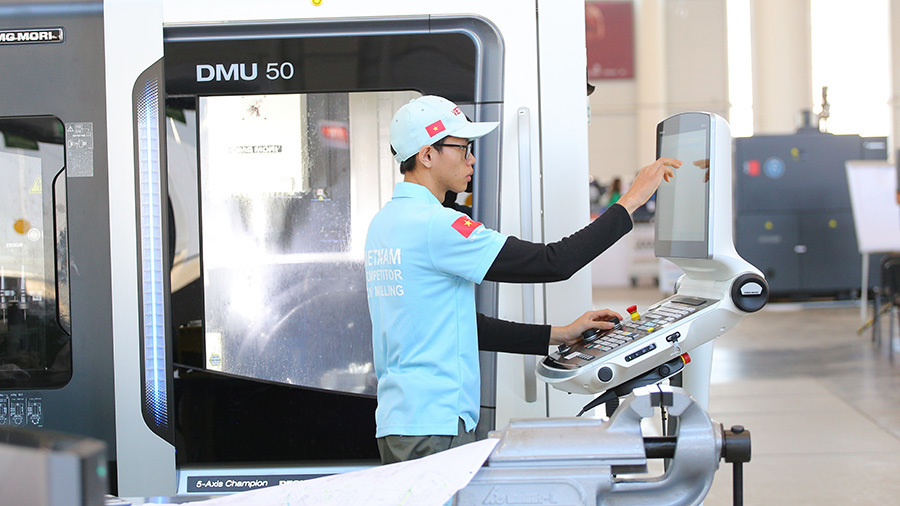 Truong The Dieu, the good worker of the digital era

Nghe An has many good students, who do well in school and on exams, and become good teachers. However, there are not many skilled workers like Truong The Dieu. Nghe An’s people now take pride in Dieu, who can walk abreast skilled workers in developed countries such as Japan and South Korea.

Dieu’s story has attracted the attention of many people. Unlike other young men, Dieu did not endeavor to enter university after finishing high school, but accepted to go to vocational school to become a factory worker. However, he vowed to study well at vocational school so as to become a good worker.

Studying hard and well, Dieu was chosen for vocational training by a foreign invested enterprise. He overcame many competitions in Vietnam before reaching out to the world.

Dieu is good at CNC (Computer Numerical Control) Milling, which is a new profession in Vietnam. When asked what CNC milling means, he gave a simple answer: this means working with a numerical control milling machine, programming on computer first, and then processing products with machines.

Dieu is an example of citizens of the 4.0 era who create products with high technological content. The CNC milling sector makes products that serve the aerospace industry and other industries.

Dieu, who did not try to enter university, who studied and worked hard day and night, except Sunday, who had great achievements at the international competition, has become an inspiring character.

Dieu often receives messages from students who ask about the experience and how to find a job, and the feeling of working in a new environment.

Dieu said he is willing to inspire other young men and help those who are passionate about the profession become familiar with new skills to compete at the 2022 Worldskills in Beijing.

Dieu hopes that he can continue working in enterprises with modern equipment and advanced technologies. He vows to become a good worker who creates products for the digital era.

The General Directorate of Vocational Education plans to offer training in 20 professions that are new to Vietnam.

The reform of vocational training in association with digital transformation and information technology application has been defined as an important solution to provide high quality human resources, according to insiders.