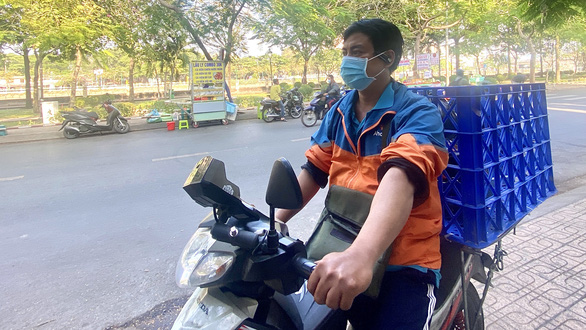 Under the impact of the COVID-19 pandemic, manual laborers in the suburbs of Ho Chi Minh City were left stranding without sufficient earnings.

Now that the city has been reviving, they are determined to make up for the lost income by working overtime and taking up side jobs.

They hope to be financially prepared before the Lunar New Year (Tet) holiday.

As the lunar year is coming to an end, many manual laborers in Saigon, or Chi Minh City, are burning the candle at both ends.

Some juggle several jobs to make up for their financial losses from the coronavirus ordeal.

They simply hope to save up a small amount to prepare for the coming Tet holiday, which starts at the beginning of February.

To the Vietnamese people, Tet is a significant event when family members can get back together, especially for people working far away from home.

Money is necessary for this celebration as people generally do their New Year shopping, buy presents for family members, and give lucky money to little children.

Taking up more work as the year ends

He used to work for a ride-sharing mobile app as a driver.

In July, however, Phuong and other drivers fell out of work when the city was in lockdown.

Her job came to a standstill for months following the social distancing policy as the pandemic struck.

Her employer announced that they would support their staff with an unemployment incentive when their premises could reopen.

“At that time, we considered moving back to our hometown in Kien Giang Province, but we have been working in Ho Chi Minh City for years,” she said.

“Now there is nothing in our hometown for us, so we’d rather wait for our chances.”

This couple contracted the coronavirus in August, just like the other tenants in their rented place.

“We got sick. We lost our income. We didn’t know when the pandemic would be over,” said the wife.

“We could not even think about the Tet holiday.”

At the beginning of October, the city began to revive, which meant people could finally get back to work.

Phuong switched to being a full-time shipper for a shipping company.

Through his relations, he found another job as a delivery worker for goods coming from overseas.

For this extra work, he spends 2-3 hours every morning.

“For the rest of the day, I work for a mobile app and deliver stuff to users,” he said.

With this work, he is earning as much as the income before the pandemic, with all costs calculated.

His wife, similarly, has been working over hours since October. She received the promised compensation from her employer and is looking forward to the financial incentive for the coming Tet holiday.

Besides, she has opened an online shop selling face masks via Facebook.

The sales from this small business are modest, but the total income from different sources is rather good for a Lunar New Year break with her family members and relatives.

D. Ngan, a resident of District 7, Ho Chi Minh City, shares a similar story. She has also been doing multiple jobs as a way to ‘end’ the year 2021.

Originally coming from Dong Thap Province in the Mekong Delta of Vietnam, Ngan works primarily for the marketing department of a university.

She is also a freelance content writer for e-news websites.

Ngan is one of the 1.3 million Vietnamese citizens who suffered an income loss in January-September due to the COVID-19 outbreak.

For the months of lockdown and social distancing in Ho Chi Minh City, Ngan worked for merely half the previous salary.

To this 25-year-old woman, it was fortunate to remain employed in such a period and to have some savings from before to cater for herself. Since Ho Chi Minh City began to ‘live with the virus’ in early October, her income has become stable.

“I haven’t heard about any Tet bonuses, but every year we should receive some according to the law,” she said.

Ngan has kept herself extremely busy as a way to prepare for the coming holiday break.

“The year-end months are the right time for boosting my income by doing different jobs,” she said.

“It is not too hard in my line of work to seek a freelance position, so I try to make time for extra money.

“It’s a little tough, though.

“It takes me 10-12 hours a day for my full-time job, and the rest of the day I get to do some other tasks to make some more.”

“I have to try hard to make up for the losses during the pandemic.”

Her plan is to come back to her hometown about three days before the Tet holiday begins. Despite her reduced income, she is confident that she can still do some good shopping for the Tet festivities.

East or West, home is best

The man yearns for a reunion with his parents, but is concerned now that his hometown in Binh Phuoc Province, around 100km away from his current whereabouts, is witnessing a rise in the number of coronavirus infections.

“We all have got two vaccine doses,” Minh said.

“I hope that for the coming weeks, the number of cases will go down and I can make some more before heading back home.”

Prior to the coronavirus health crisis, he was a waiter for a seafood restaurant with a handsome salary, enough for himself and for supporting his parents.

In June, the man got his final monthly pay before his employer closed permanently.

Minh is among 1.3 million unemployed members of the workforce in January-September, according to the General Statistics Office of Vietnam.

As his savings were running out, he decided to seek some new job and had to borrow here and there.

In early October, this 26-year-old man once considered going back to his hometown for a new beginning, but he had second thought and stood his post in the city.

Recently, he has registered as a driver for a ride-sharing mobile app.

“I can earn enough to live with, but now that too many people are doing this job, I don’t really save a lot after covering petrol cost, vehicle maintenance, and daily meals,” he said.

For the last two months, he has been running a snack stand selling fish balls at the front of his rented house during the evening hours, while the day time has been dedicated to his driving job.

The earnings from the side work are unstable from day to day, but at least they give him a bit more income.

For this forthcoming Tet, Minh does not have enough to do any fancy shopping for himself. He will, however, have his motorbike serviced, for it is his means of work.

He will also ride his bike back to his parents. To him, Tet is the best chance for a get-together after half a year away from home.

He hopes to spend more time with his parents now that they are aging.

Le Thi Thao is a peddler in Binh Thanh District. She has also been trying her best to save up for a reunion with her two children.

Her income stalled for the months of social distancing. This prompted her to send her children back to her parents.

As peddling has been allowed, she is determined to compensate for it. Instead of ending her daily wandering at 9:00 pm or 10:00pm as before, now she keeps on until midnight.

To this 37-year-old mother, what matters is the social stability after the pandemic hit so that she and others can be back to their hometown for Tet.