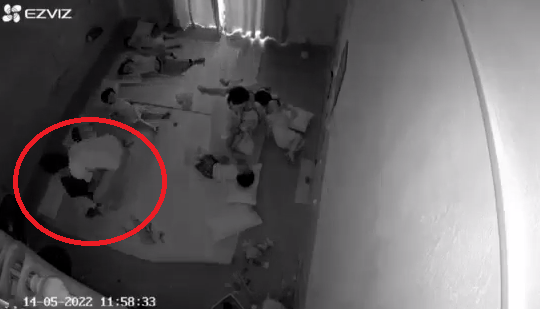 A screenshot is captured from a video which shows a teacher covering a boy’s head with a black plastic bag at Bong Sen Kindergarten in Bao Dap Commune, Tran Yen District, Yen Bai Province, northern Vietnam.

A teacher at a private kindergarten in northern Vietnam has been found to have used a black plastic bag to cover the head of a 27-month-old boy and beat on his buttocks.

In video footage which was spreading on social media, the teacher in Bao Dap Commune, Tran Yen District, Yen Bai Province took the plastic bag off the boy’s head and took him outside after realizing a camera was in the classroom.

Pham Anh Duc, chief of the office of the Tran Yen District administration, told Tuoi Tre (Youth) newspaper that upon receiving reports of the incident, the district asked Bao Dap Commune to cooperate with local police in investigating the case.

He added the case occurred at Bong Sen Kindergarten, which was opened on May 5, in Nhan Nghia Village.

On May 14, the 27-month-old boy wet his bed and cried, according to initial investigation.

The teacher in question soothed him but the boy still cried, so she covered his head with the black plastic bag.

She claimed to have done so to help the boy fall asleep faster.

Duc said the teacher’s act was repulsive and created a negative insight about early childhood education.

Bao Dap Commune has been coordinating with the local police to work with the teacher and the boy’s family to consider penalties for the teacher.

The boy is under treatment for a bowel disease so his family will work with police officers after he recovers, Duc noted, adding that the official conclusions on the case will be made soon.