E-riding firms have raised taxi fares, and traditional taxi firms are expected to follow the move. 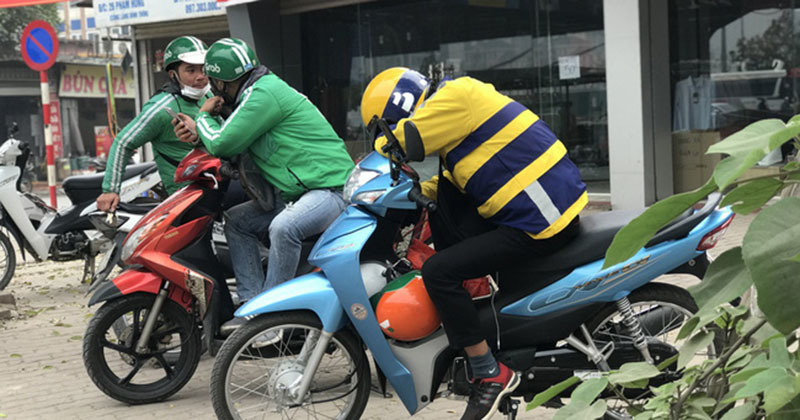 Hailing a car to the office on Monday, Thu Trang, an office worker in Hoang Liet, Hanoi, noticed a high fare, which was thought to be attributed to the rain, which had raised demand. However, the real reason was the jump in petrol prices.

Trang said the distance from her home to the office is six kilometers and she spends VND60,000-70,000 from home to the office. After Tet, the fare increased slightly to VND80,000-90,000 because of the increase in number of positive Covid cases, which led to a drop in the number of drivers.

But Trang had to pay VND140,000 on Monday and was warned that the taxi fare would increase further.

Trang was worried after hearing that Grab plans to raise the fare on March 10. “I could not believe that the fare would soar so dramatically. The high taxi fare will clean me out,” Trang said.

“I may have to think of going to the office with a private motorbike,” she said.

A trip to school costs VND80,000 which is shared between Mai and a neighbor, whose daughter is also a student at the same school. VND40,000 each day is affordable. However, she has been warned that the fare will increase as a result of the petrol price hike.

“The fare increases will burden us. My son goes to school and to private tutoring classes every day,” she said.

Hoa has hundreds of daily orders. The fee increases have affected her business as buyers are tightening their purse strings because fees are high.

Chat forums with shippers have also demanded a shipping fee increase of VND10,000-20,000, depending on the distance. A shop owner said some shippers even refused to cooperate with shops with a low number of daily orders.

Transport fee on the rise

Some e-riding firms have raised fares. Grab Vietnam has announced an increase in fees of all services, commencing March 10. The increase is necessary to help drivers have more opportunities to cover their basic needs and encourage them to better serve passengers.

GrabBike service fees have also been raised in 30 other cities and provinces as well.

The latest fee adjustment Grab made was in late 2020.

“If the state doesn’t take measures to intervene in the petrol price, taxi firms will have to adjust fares,” Nam, a driver, said.

In theory, taxi firms can raise the fare to cover the fuel cost, but don’t want to do this. “High fares will force clients to restrict travel. If so, drivers’ income will be affected,” he explained.

Because of the previous lockdown, e-riding and traditional taxi firms had to stop operation at various times. They resumed operation in late 2021.

The Ministry of Industry and Trade (MoIT) has instructed agencies to ensure the supply of petrol amid tight supply.