Floating on the sea, with no wifi and no telecommunication waves, people on journeys to Truong Sa (Spratly Islands) and DK1 Rigs can find common ground with Vietnamese citizens. 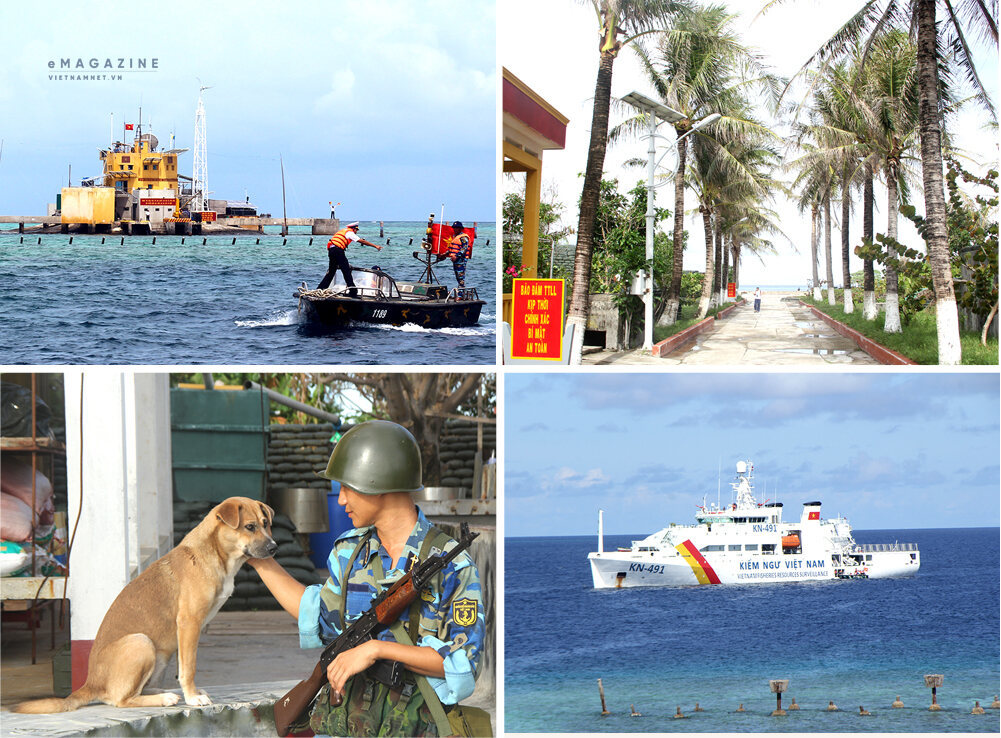 Since the first journey in 2021, eight visits have been organized for over 600 overseas Vietnamese from many countries and territories all over the world.

The visits to Truong Sa and DK1 create a strong connection with Vietnamese people and between them and the country, becoming an expected event every year for Vietnamese living far from the homeland.

Visits that warm the heart

Rear Admiral Do Minh Thai, former Deputy Chief of Staff of the Vietnam People’s Navy, said he is lucky having the opportunity to bring overseas Vietnamese to Truong Sa and DK1 five times. The first time was in 2011.

“I think that maritime sovereignty is the glue that unites overseas Vietnamese with people in Vietnam. We all together look towards the country and the fatherland, and so we all are willing to put aside problems in the past,” he said.

With such a mindset, naval officers understand their task of leading overseas Vietnamese to Truong Sa and DK1, so they can see the great efforts of millions of Vietnamese people to struggle for and protect sea and island sovereignty.

Thai recalled the journey to Truong Sa in 2014. There were some individuals who disliked Vietnam and were invited by the Ministry of Foreign Affairs (MOFA). One of them was Nguyen Ngoc Lap, who was a second lieutenant Marine under the Republic of Vietnam.

After getting to the islands, Lap fell sick and he was brought to mainland by seaplane. When the group of overseas Vietnamese returned to mainland, Lap went to the wharf to welcome the delegation and showed an attitude quite different from that of some days before.

“When we treat each other with sincerity, frankness and openness, we will find a common voice,” Thai said.

Before getting onboard, some people still had some concerns, but after many days of living and experiencing with soldiers and people on the islands, they all could feel warmth, assurance and peace of mind.

“It was heartwarming as the life of soldiers and people on the island has been upgraded. They feel secure as the defensive posture on the islands, at the rigs and on the sea have significantly improved, and they feel peace of mind with the rear policy,” he said.

The journey of the heart

Ambassador Luong Thanh Nghi, Deputy Chair of the State Commission for Overseas Vietnamese, said information to overseas Vietnamese on the protection of the country’s maritime sovereignty has been carried out effectively through high-level visits, forums and seminars.

The organization of trips for overseas Vietnamese to visit Truong Sa and DK1 rigs is of great significance. People can witness with their own eyes the changes of the homeland and the growth of the navy that is protecting the sacred sea and islands of the fatherland in particular.

After such trips and returning to the countries where they live and work, they become messengers spreading the love of the fatherland to other Vietnamese.

“We really appreciate the gifts that people give to officers, soldiers and people on the islands, from solar panels and electricity generators to water purifiers,” he said.

“We are especially touched when receiving gifts both material and spiritual from the expatriates. We sometimes, in mid-day of summer, receive images of rau muong (water morning glory) with dracontomelon soup from islands. This was the food that expatriates bought and sent to the islands,” he continued.

Deputy Foreign Minister Pham Quang Hieu, Chair of the State Commission for Overseas Vietnamese, said independence, sovereignty, unity and territorial integrity are sacred and paramount issues for each country. Vietnamese people in Vietnam and overseas always show their deep affection for the cadres and soldiers who are guarding the sea, sky, and the maritime sovereignty of the country day and night.

According to Hieu, each visit leaves a deep impression on the hearts of every Vietnamese individual. The visits to Truong Sa and DK1 are called a “journey of the heart”.

The organization of the trips in recent years help affirm Vietnamese sovereignty over Truong Sa Islands. They also serve as an opportunity for Vietnamese from all over the world to meet each other and connect with Vietnamese in Vietnam, thus contributing to strengthening of national unity.

From 2012 to now, overseas Vietnamese have donated VND10 billion to Truong Sa, including one sovereign boat worth more than VND3billion, and VND3 billion to the Fund for Vietnam’s Sea and Islands, and many other valuable artifacts.

In 2020-2021, the trips could not be organized because of Covid-19. However, the State Commission for Overseas Vietnam received material and spiritual contributions from Vietnamese people from all over the world.