Suspect arrested for stealing phone from Russian tourist in Vietnam 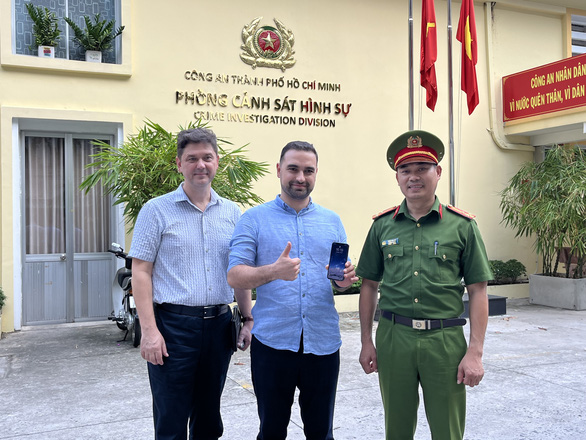 This photo supplied by police shows Alexey Pronichkin (middle), a Russian tourist, receiving his smartphone back from a police official in Ho Chi Minh City, Vietnam.

Police in Ho Chi Minh City have detained a local man after he was found stealing a smartphone from a Russian traveler.

Ngo Phuong Tam, 36, residing in District 4, was arrested at his home on Thursday as the suspected culprit of a phone theft that happened four days earlier, police officers said.

The victim was Alexey Pronichkin, a 32-year-old man of Russian nationality and a visitor to the southern metropolis.

On the evening of April 17, Pronichkin was standing on Pham Ngu Lao Street in downtown District 1 to catch an app-based motorbike taxi to his residence in Binh Thanh District.

At that time, Tam, in tech-based motorbike taxi driver uniform, rode his bike up to Pronichkin and suggested driving him home.

The foreigner agreed to Tam’s suggestion, got on the bike and handed his handbag to Tam, who then hung it on the front of the bike.

When they reached an apartment building in District 4, Pronichkin found Tam was driving him on the wrong route, so he opened his cellphone to find the right way home.

Tam asked the Russian man to hand the phone to him for directions and at that time, the foreigner’s handbag fell off the bike to the ground.

The driver halted the bike and asked Pronichkin to get off to pick up the bag, but when the passenger was picking up his bag, Tam sped up and drove away.

Pronichkin reported the case to police who launched an investigation to hunt for the driver.

Through different information sources, a police task force team identified Tam as the suspect and arrested him at his home on Thursday afternoon.

The man has two previous convictions for robbery and another for appropriation of property.

Police officers got back the phone from the shop and returned it to the Russian traveler afterward.