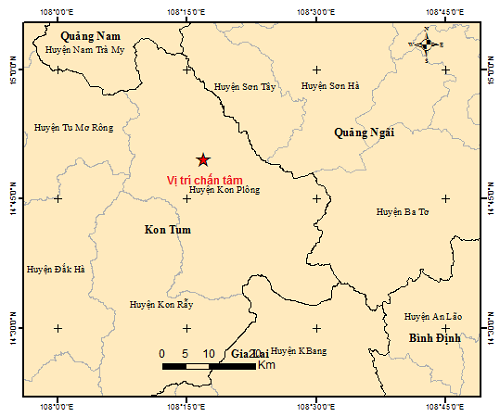 The map shows the location of the epicenter (red star) of the 5th earthquake in Kon Plong District, Kon Tum Province, Vietnam’s Central Highlands at 8:34 pm on April 15, 2022. Photo: The Institute of Geophysics

Six tremors, with magnitudes of up to 4.1, vibrated Kon Plong, a mountainous district of Kon Tum Province in Vietnam’s Central Highlands, during Friday, the Institute of Geophysics reported.

Of these quakes, three happened in the early morning and the rest in the evening, the institute’s Vietnam Earthquake and Tsunami Warning Center said.

The first three trembles occurred at 0:43, 1:39 and 2:55 am, with magnitudes of 3.3, 3 and 3.1, respectively, at a depth of around eight kilometers, the national radio station Voice of Vietnam (VOV) cited the institute.

These earthquakes did not pose any disaster risk, the center said, adding that it was continuing observing related developments.

Since the beginning of this year, Kon Plong has experienced dozens of quakes with magnitudes from 2.4 to 3.7, all being weak and moderate and causing no danger.

The same situation was seen last year, when a series of tremors with magnitudes below 4 hit the area.

In June 2021, the institute sent staff to this area to set up an additional observation station to detect dangerous geological phenomena and thereby release corresponding warnings.

Kon Plong and Kon Tum in general belong to a small fault zone, and previous studies have shown that earthquakes there usually have magnitudes of no more than five, said Nguyen Xuan Anh, director of the institute.

Anh stated that the institute regularly provides local authorities with reports on seismic activities in the province.

Attention should be paid to earthquake resistant designs for construction works and authorities should equip locals with knowledge and skills to prevent, avoid and minimize damage in case of strong earthquakes, Anh advised.

He also laid emphasis on strict compliance with the Regulation on Prevention and Control of Earthquakes and Tsunamis promulgated by the Prime Minister in 2007.

Vietnam has so far recorded three detrimental quakes, which occurred in northern Dien Bien Province in 1935, 1983 and 2001 with the magnitudes of 6.9, 6.7 and 5.3, respectively, according to official statistics.

Of these natural disasters, the 2001 earthquake alone caused a damage of VND210 billion (US$9.17 million).