Many South Korean enterprises have chosen HCMC as a destination to develop their business and will increase their investment in the city in the coming years, said South Korean Ambassador to Vietnam Park Noh Wan. 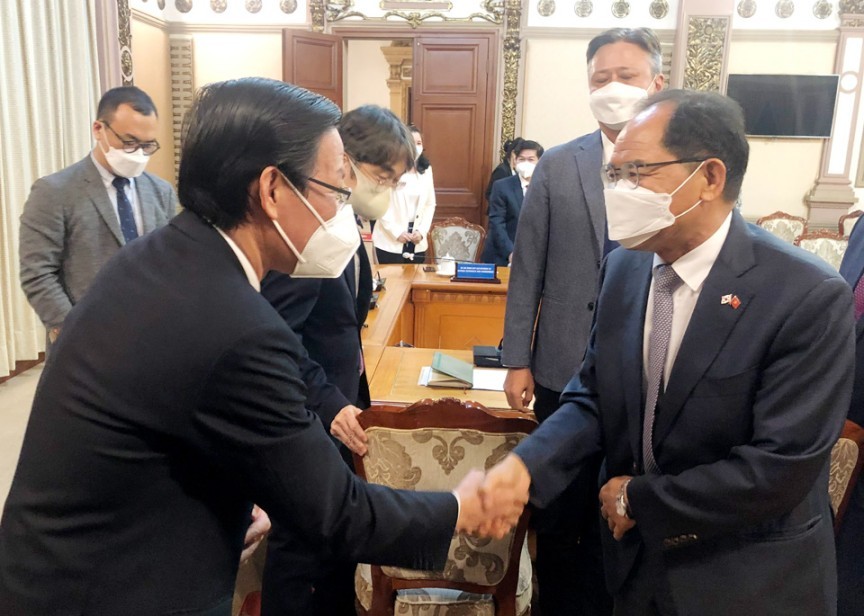 At a meeting with HCMC Chairman Phan Van Mai on January 21, Park said South Korea was interested in the HCMC market and would hold a seminar to promote investment, trade and technology development in HCMC with the participation of 50 South Korean businesses.

South Korean firms which have been operating in HCMC also have plans to expand their operations in the city. A representative of CJ Group said the firm would develop a large industrial and cultural complex in Tan Phu District.

Park also mentioned some difficulties facing South Korean investors in HCMC. Specifically, after the city brought the pandemic under control, many firms sought to send their experts and technicians to Vietnam, so Park proposed the HCMC government ease regulations to facilitate foreign firms.

He added that when representatives of South Korean companies come to the city, they tend to bring along their families.

However, the international school in District 7, where many South Korean people live, is overcrowded, so the city should make conditions easy to expand the school.

A representative of the Korea Chamber of Business in Vietnam also suggested the city organize a meeting with its enterprises to find ways to eliminate investment and business obstacles.

At the meeting, HCMC Chairman Mai acknowledged the proposals and opinions of Park and South Korean enterprises, saying that the city had paid attention to the development of social infrastructure facilities, including schools for foreign investors’ children.

The city will also work with the relevant departments and agencies to facilitate entry of South Korean experts and technicians into the city.

As for the project of CJ Group, Mai asked CJ to formulate the project at the earliest and said the city would support its execution.

He added that the meeting between the city and South Korean firms would be held before June.

Mai affirmed the importance of the partnership between Vietnam and South Korea, which should be developed further. At the city level, HCMC has established cooperation relations with seven localities of South Korea.

As of 2021, South Korea was the third-largest foreign investor in HCMC, with more than 1,900 projects. At present, over 2,000 South Korean firms are operational in the city.

Mai suggested the South Korean Embassy in Vietnam inform the city of the demands and proposals of South Korean firms so that the city could improve its investment environment to attract more investors.

Ambassador Park said HCMC had played an important role in boosting the partnership of the two countries and expected the city to create favorable conditions for South Korean experts and enterprises to enter Vietnam, contributing to enhancing the trade relations between the two sides.