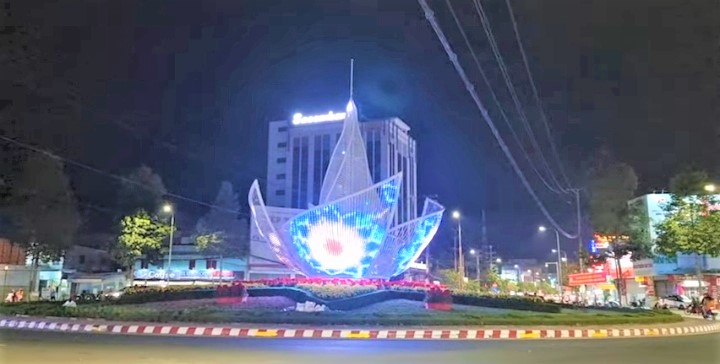 Members of the public have raised concerns about the colorful lighting system at a roundabout in Ben Tre City, the capital of the namesake province in Vietnam’s Mekong Delta region, saying that it dazzles their eyes and threatens traffic safety.

The LED light system has just been built at the intersection of Dong Tay Boulevard and Dong Khoi Boulevard.

Nguyen Nhat Minh, a 48-year-old man residing in Ben Tre Province, said that the lights at the roundabout monument dazzled him every time he traveled near it.

“If there are any unexpected occurrences, I will definitely not be able to handle it in time,” Minh said.

“Besides, some people driving past here tend to be busy looking at the lights instead of focusing on driving, so it’s also very dangerous.”

Many Internet users even criticized that the lighting work, which they said to be worth about VND4 billion (US$175,800), was a waste.

Addressing the complaints during a discussion with Tuoi Tre (Youth) newspaper on Monday, Ben Tre Province chairman Huynh Vinh Khanh affirmed that the lighting project in question had undergone esthetics and traffic safety evaluations by related departments prior to its construction and operation.

“I would like to clarify that the cost of this lighting system is not VND4 billion as said on social networking sites, but VND3.2 billion [$140,500] to be exact,” Khanh said.

“This cost is not only spent on the lights and the frames but also on the foundation, the electricity network, and the smart control system of the project as a whole.”

Since the lighting project was put to use, there have been no traffic accidents reported near the roundabout, Khanh affirmed.