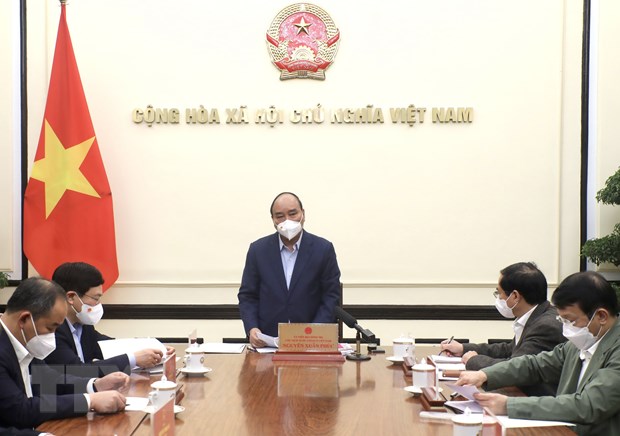 Vietnamese State President Nguyen Xuan Phuc has urged relevant ministries to pay special attention to the protection of Vietnamese citizens in Ukraine and ensure their safety during evacuation.

President Phuc chaired a meeting with the Ministry of Foreign Affairs and other authorities on Sunday to listen to reports on the citizen protection process in Ukraine in the context of the ongoing Russia-Ukraine military conflict, which started on February 24.

According to Vietnamese Ambassador to Ukraine Nguyen Hong Thach, who joined the meeting virtually, the embassy has coordinated with relevant agencies to support and evacuate many Vietnamese citizens from conflict zones upon their request.

Others wished to remain in Kharkiv and Odessa to watch over their assets, Thach added.

President Phuc praised the foreign ministry and relevant agencies for their efforts to protect Vietnamese expatriates in Ukraine and assist them in returning to Vietnam.

Special attention must be paid to the citizen protection process, he continued, adding that the citizens must not be left hungry or cold during their evacuation.

The president applauded the government’s plan to conduct free flights bringing Vietnamese citizens in difficult circumstances in Ukraine back home, with priority given to women, children, and the elderly.

Those who stay in the European country must be safely evacuated out of war zones.

President Phuc tasked the Embassy of Vietnam in Ukraine with ensuring the lives and properties of Vietnamese citizens there.

About 7,000 Vietnamese people live in Ukraine, according to the Ministry of Foreign Affairs.

As of 5:00 pm on Sunday, more than 2,500 of them had moved out of conflict zones to Poland, Hungary, Romania, and Slovakia.

Vietnamese representative agencies have been assisting the citizens in completing the necessary procedures for their entry and transit.

They have coordinated with local authorities and Vietnamese people associations in the host countries to provide temporary accommodations and essential items for the evacuated citizens.