Police lieutenant saves 4 from drowning in 10 minutes in Vietnam 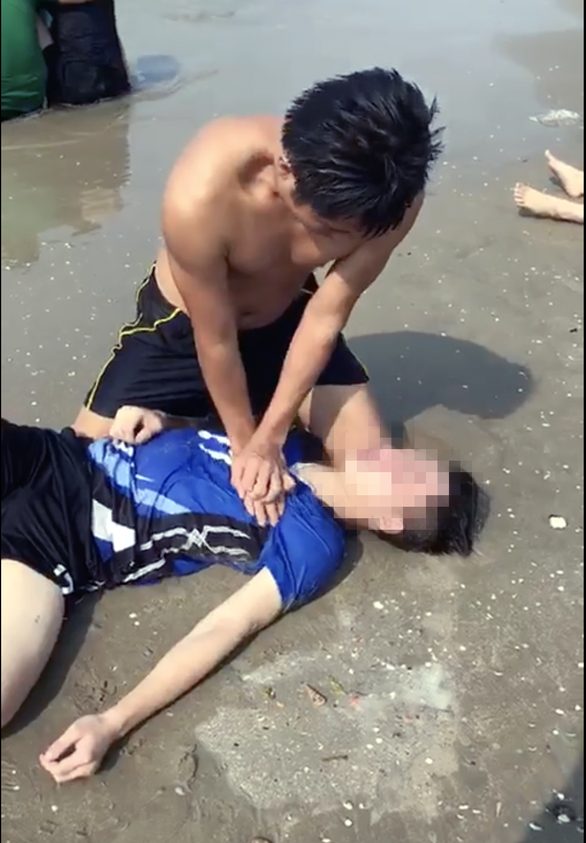 This image, extracted from a video clip, shows Lieutenant Thai Ngo Hieu applying external cardiac massage on one of the victims he saved from drowning at the Phuoc Tinh beach in Ba Ria-Vung Tau Province, southern Vietnam, April 10, 2022.

A 33-year-old Vietnamese police lieutenant saved four young people from drowning at a beach in southern Vietnam on Sunday morning.

“My rescue operations took place quite quickly, only about 10 minutes,” Lieutenant Thai Ngo Hieu, from a fire and rescue team of the Department of Public Security in southern Dong Nai Province, said of his life-saving actions.

“If it had taken longer, they might have all died.”

Hieu, 33, also expressed his deep disappointment and regret for not being able to save the one fatality in the group.

All the survivors are young, with the oldest born in 1999.

The incident took place at 9:00 am on Sunday off the Phuoc Tinh beach in Long Dien District, Ba Ria-Vung Tau Province.

At that time, Hieu was bathing on the beach with his family when he heard shouts for help from a group of young people 30 meters away.

Seeing that many of them were going to drown, Hieu immediately swam to them and in his first effort, he pushed three of them to the shore.

He then moved back to the sea to save one more victim.

At the same time, two other swimmers rescued two more members of that group, Hieu narrated.

Hieu immediately performed CPR on the victims to revive them.

Right after that, Hieu heard that there was still one more victim at sea so he joined a local rescue team in another life-saving effort but the person did not survive.

As a rescue and salvage officer, Hieu said he had been well trained in this field and has dealt with hundreds of rescue cases, including one in which the victim was saved from a well at a 40-meter depth.

After a video clip of Hieu saving four lives was spread rapidly on social networks, thousands of netizens gave numerous comments in which they expressed their high appreciation and admiration for the man’s brave actions.

They also extended deep condolences to the family of the drowning victim.

Some people called Hieu a ‘hero’ and said he should be honored with a certificate of merit for his noble, altruistic deed.

Meanwhile, Hieu considered his endeavors ‘very common’ as they were part of his job as well as his daily duty.

Anyone would take action to help others in distress, the lieutenant added.

As far as Tuoi Tre (Youth) newspaper knows, Hieu has taken part in many successful rescue operations and has been commended by the Fire Prevention and Fighting and Rescue Police Department, under the Ministry of Public Security, as a bright example for others to follow.