Prime Minister Pham Minh Chinh asked the northern port city of Hai Phong to work harder to become the centre for regional connectivity given its favourable location and situation. 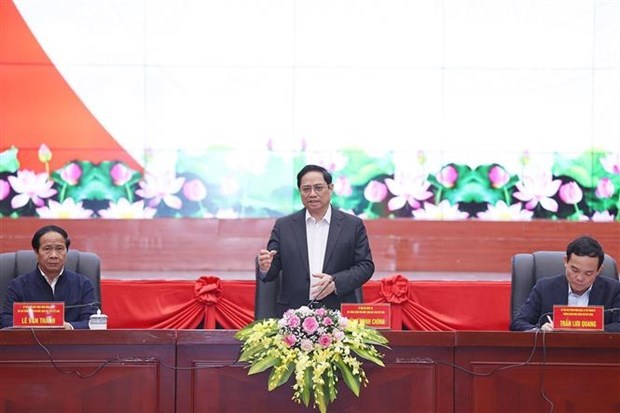 At a working session with the city leaders on December 19, he asked the city to further promote its internal strengths for faster and more sustainable development in which science-technology, renovation and digital transformation playing the core role.

Hai Phong should focus on developing green economy and high-tech agriculture, while ensuring harmony between economic development and security, defence protection and socio-cultural growth, he said.

Deputy Secretary of the Party Committee and Chairman of the People’s Committee of Hai Phong said that in 2021, Hai Phong has completed 13 out of 19 socio-economic targets. The six remaining, although being below expectation, are at higher level compared to the previous year, he said.

The city leader reported that the regional gross domestic product (GRDP) has expanded 12.38 percent, while the industrial production index has risen 19 percent year on year. Total budget collection has reached over 90.4 trillion VND (3.93 billion USD, exceeding the assigned target by 17 percent. The city has attracted over 3.1 billion USD in foreign direct investment, doubling that in 2020, while total import-export revenue has hit more than 25 billion USD, 23 percent rise year on year, he said.

Leaders of the city made a number of proposals to boost socio-economic development in the city as well as the northern key economic region, including the building of a coastal expressway and issues related to some seaport, airport and power projects.

He asked the city to build a long-term planning to optimise its advantages and potentials, while speeding up administrative reform, boosting logistics development as well as green and clean energy.

The Government leader basically agreed with Hai Phong’s proposals and asked ministries and sectors to coordinate closely with and create optimal conditions for the city to implement projects.

Vietnam has regarded people as the centre, subject and driving force and target of development, PM Pham Minh Chinh told a plenary session of the third annual high-level forum on the fourth industrial revolution in Hanoi on December 6.