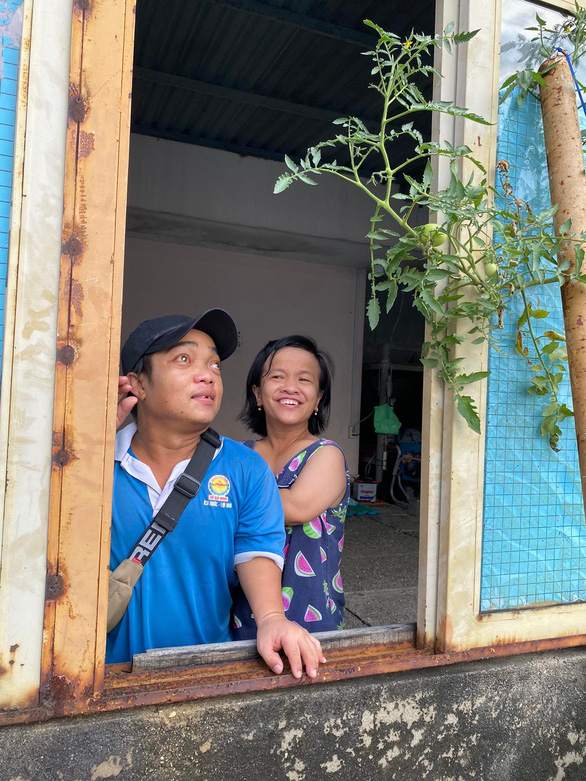 Nguyen Van Luong and his wife admire the young tomatoes they grow themselves from the window ledge of a loft atop a sports center in Ho Chi Minh City, Vietnam. Photo: Le Van / Tuoi Tre

Nguyen Van Luong and his wife, who both stand less than 1.1 meters tall, have conquered ‘pinnacles’ together by overcoming adversity and undergoing training for their performances in track and field athletics at a rooftop attic in Ho Chi Minh City.

Their height, of less than 1.1 meters, is not the only thing they share.

The couple first met each other six years ago and soon found themselves passionately in love and happy together.

They currently stay rent-free at a loft on the rooftop of Tan Binh District Sports Center, where they, far from the crowd, nurture their love and seek a source of strength to triumph over adversity.

When the southern metropolis, one of the country’s largest epicenters in the most recent COVID-19 outbreak, entered social distancing at various levels from June to September this year to slow the spread of the coronavirus, the married couple found themselves out of work and struggling to put food on the table.

Still, they clung to their hope for a better future.

They sold lottery tickets to earn a living before the pandemic.

The couple moved from Dong Thap Province in the Mekong Delta to the southern hub to attend a nationwide para-sports tournament.

It was Dang Van Phuc, head coach with the National Track and Field Para-athletics Lineup and the couple’s instructor, that arranged them to stay rent-free in the attic atop the Tan Binh Sports Center.

For the couple, who were trapped in the city due to travel bans, their coach’s assistance was a crucial part of survival.

Luong’s childhood was a series of adversity and a constant struggle.

Growing up in a farming family of five children in the southern province of Dong Thap, Luong and two of his siblings struggled against discrimination for their short stature and height of just over one meter that results from a genetic condition.

The young man did all kinds of odd jobs around the town to help provide for his family.

Despite his own limitations, Luong still chooses to look on the bright side and tries to live in happiness and independence instead of fear of discrimination.

“I was upset to find myself at the end of condescending stares and unfair treatment. But it’s pointless just asking ‘Why me’ or falling into despair,” Luong recalled.

After finishing the sixth grade, he began helping around at local filling stations and eateries.

Some employers even paid him only one third or half of what his able-bodied coworkers earned because of his disability.

As he failed to secure any stable profession in his hometown, Luong was forced to sell lottery tickets in Ho Chi Minh City to earn himself a living and support his family back home.

The man’s turning point came when he discovered his interest in sports following a chance meeting in late 2012 with a male friend who practices athletics with the disabled community.

That is how Luong began his career in para-sports, changing his own way of participating in society.

The athlete had encountered frustration during his first training days due to his disability but later found his rhythm and determination to finally get where he is today, bringing home a wide range of medals in javelin throw, discus throw and weightlifting at various city- and national-level tournaments.

To Luong, sports means much more than accolades and cash rewards, as it allows him to get to know many disabled peers and travel far and wide as well as earns him the recognition he has always yearned for.

“Some tournament trips, which can last up to 10 days, took me across the country. This I had never dreamed of,” Luong shared.

The greatest miracle sport brought to Luong is Dao, his wife.

Dao emotionally recalled how their paths crossed in early 2014, when Luong was helping his coach hunt for a female athlete.

Dao was then a lottery ticket vendor.

Like her future husband, Dao gladly accepted his coach’s unexpected offer to become an athlete, which gave her the chance to advance her life in new ways.

Dao, who had left her hometown in the north-central province of Binh Dinh for Ho Chi Minh City to make a living, admitted she and Luong started out as friends but soon had budding feelings and they seemed to have found a soul mate within each other.

Like most disabled couples, the greatest hurdle for them to overcome were their own feelings of uncertainty and objection from both families, who by no means wanted their child to end up in an unhappy life.

Despite feeling daunted that their love story would go nowhere, they got inspiration from a mass wedding organized by meritorious artist Kim Cuong for 40 couples with disabilities in 2015.

No matter how bleak the future might look, the couple decided to tie the knot in the southern metropolis in October 2015.

Good news followed as Dao was pregnant one year later.

Their joy, however, was short-lived as doctors advised them to end their pregnancy.

Against the doctor’s warnings, Dao was determined to give birth to their much-awaited baby, but unfortunately, their newborn died soon after birth due to respiratory complications.

Despite all the difficulties ahead, the couple keep moving forward with their lives together to reach a better future.

Dao and Luong shared they will stay in Ho Chi Minh City if they can survive as lottery ticket vendors and athletes, or they may find their way back to Luong’s hometown.

However harsh it is, their life is not without blessings.

They have come to realize that while the pandemic is unprecedented, so is the charity and ‘leave-no-one-behind’ spirit of the city.

During the social distancing period when lottery ticket vending was banned, the owner of a fitness center at the building where they are staying offered them employment so they could meet their monthly household bills.

Others are also sympathetic and helpful.

“Despite being athletes, Luong and Dao are still at rock bottom and can only compete whenever tournaments are organized,” said head coach Dang Van Phuc, also the couple’s instructor.

“They still have to juggle ticket sales or errands with training for competitions to make a living.”

Despite all that, the couple remain eager to reach the finish line on a high note with a more rewarding future and a child of their own.