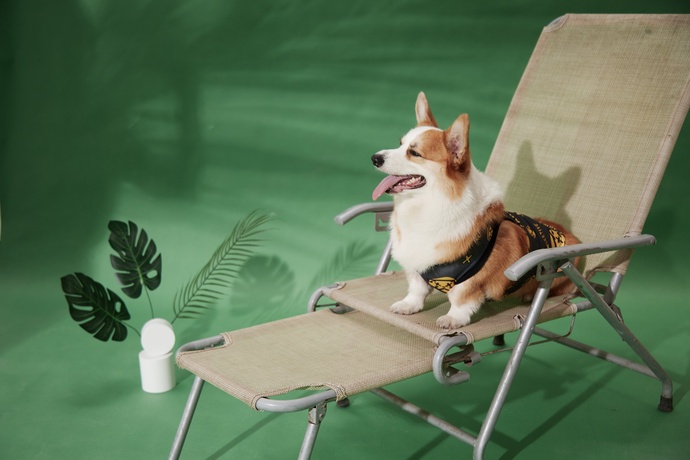 Bo, an adorable Corgi pooch, poses for an advertisement photo shoot in this photo supplied by his owner, Hoang Nhat Ha, who resides in Ho Chi Minh City, Vietnam.

As their photos and video clips go viral on social media and are embraced by local and international animal lovers alike, a rising number of pets kept by people in Ho Chi Minh City and the neighboring province of Dong Nai have been catapulted into fame and are even generating income for their owners.

Photos and videos of these adorable, four-legged ‘idols’ bring smiles to social media users with their cuddliness, playfulness and smiley demeanors.

These furry stars’ popularity has been growing steadily in recent years, as adorable dog- and cat-themed channels have been sprouting up on platforms including Facebook, Instagram, Tiktok and YouTube and enjoy a large following.

The owners of these pets, who run the channels, have thousands or even millions of followers, and have been showered with praise and encouraging comments.

Many of these young people might not think their pets would enjoy stardom when they first posted photos and video clips capturing the furry balls in their happiest, naughtiest moments and also throughout their rehoming and recuperation journeys.

As the posts were embraced with enthusiasm by netizens, these animal lovers stepped forward and launched their own channels.

Before they knew it, their beloved canines and felines achieved celebrity pet status and are now permanent fixtures on the channels or their own profiles and began bringing home an income.

Earning their ‘own living’

Bo, a three-year-old Pembroke Welsh Corgi owned by Hoang Nhat Ha, has acted in several advertisements for different brands since he stepped into her life.

The 30-year-old woman, a resident in Ho Chi Minh City, proudly shared that her well-groomed pup, who indulges in quite a lavish life, has appeared in advertisements for around nine brands.

According to Ha, her pet’s ‘debut’ is a role in a commercial for a center offering math lessons to children.

Bo’s acting skill in the commercial earned him instant recognition as he played a member of the family who is always there for his young owner.

Ha is proud that her pet can showcase his well-groomed appearance and charisma while earning her some money as well.

“I let Bo do some work so he can cover his own living expenses,” the young woman said with a smile.

A TikTok page named ‘Candy the Corgi’ currently has more than 610,000 followers and 8.2 million likes.

These are accounts that Dinh Tri Quang, from Go Vap District, also in Ho Chi Minh City, opened in a bid to shoot his dogs into the spotlight.

The two most promising ‘faces’ among his pack are Keo (Candy) and Gody Thanh Long (Gody the Dragon Fruit).

Gody Thanh Long got his/her name from an incident in March last year, when the pup, then two months old, was found on the floor with his coat smeared with blood-like stains.

The sight gave his owners a fright before they found out that the stains came from the juice of a red-fleshed dragon fruit which Gody had eaten.

The post was a big hit among animal buffs in Vietnam and other countries.

“Each of my posts approaches around 100,000 users and is liked by about 5,000 users,” Quang said, adding he plans to launch a fan page dedicated to Gody.

Unlike Candy and Gody, who are mini celebrities in their own right thanks to their playfulness, Ver (Vo), another Corgi dog, has melted social media users’ hearts with his happiness-seeking journey.

The dog was diagnosed with severe dermatitis and bladder stones when Hien decided to add him to the lot.

His chronicle of treatment and recovery has received a lot of love from netizens.

Together with Det, another Corgi pooch kept by Hien, Vo now enjoys being the center of attention and is showered with gifts, including food, toys, snacks, clothing and even accessories and jewelry from good wishers.

Each of this pooch’s clips is viewed thousands and even millions of times.

Moca is a hit on the Internet for his silly demeanor, uncommon steely grey eyes and ‘disappearing into thin air’ magic tricks which he performs alongside his owner.

The adorable pooch and his owner remain quite active on social media and keep the fans, both local people and foreigners, updated about his latest tales with English subtitles.

Though Moca came into Dat’s life in 2017, it was not until two years later that the young man posted the pooch’s first video clip onto TikTok.

The man took his hobby to another level when he found himself working remotely during the first COVID-19 outbreak in early 2020 and thus making more videos of his beloved companion.

It clicked. The following of Moca’s channel has since rocketed to thousands and even millions from only hundreds at the beginning.“As the channel makes quite a splash, I began receiving offers for advertising shows from pet shops and pet-related apps,” Dat shared, adding he is giving a shot at a namesake Youtube channel for extra passive incomes.

Dogs and cats: to be loved and remembered

A dog show running on the 27th and 28th of October, 2018 at Dam Sen Theme Park, located in District 11, Ho Chi Minh City, proved a magnet for animal enthusiasts who brought in their pooches of different breeds and enjoyed the overdose of cuteness.

The paw-some event was where animal keepers could get together to share tips in properly raising animals and behold and interact with their adorable furry pals.

Similar festivals and memorial days dedicated to the fluffy pals have been celebrated in some countries.

International Dog Day, held on August 26 each year, has been created so that all breeds of dogs are celebrated. The day also helps raise public awareness in recognizing the number of dogs that must be rescued on a yearly basis, from pure breed rescuers, rescues, and public shelters.

Man’s best friend and heroic contributions of service and therapy dogs are also honored on this day.

In several countries, especially the U.S., many occasions have been dedicated to man’s best friend as these little bundles of joy deserve to be celebrated every day and for all their lives.

Others include World Stray Animals Day (April 4), World Pet Memorial Day (every year on the second Tuesday in June), International Homeless Animals’ Day (on the third Saturday in August), International Cat Day (a celebration which takes place on August 8 of every year), and National Hug Your Cat Day (June 4, whether the feline companion likes it or not!)