Every official and Party member should be a role model, uphold the sense of responsibility, and create a high consensus in organizing the implementation of the Resolution of the 13th National Party Congres,s 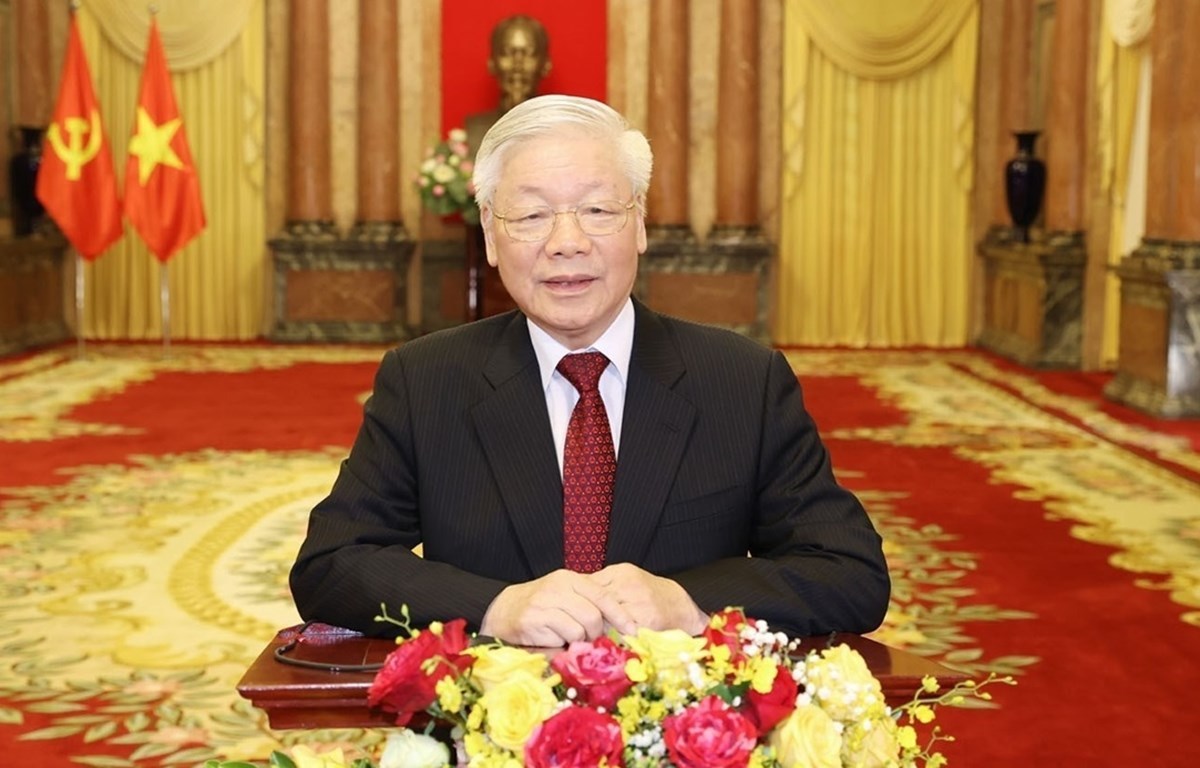 
Every official and Party member should be a role model, uphold the sense of responsibility, and create a high consensus in organizing the implementation of the Resolution of the 13th National Party Congress, towards the goal of building a more and more powerful and prosperous Fatherland and making the people more and more happy, Party General Secretary Nguyen Phu Trong has said.

The Party chief made the statement in an exclusive interview granted to the Vietnam News Agency (VNA) on the occasion of the Year of the Tiger 2022.

He affirmed that the 13th National Party Congress, which was the convergence point of the Party’s prestige, the nation’s vision and aspirations and the people’s confidence, is of special importance in the process of promoting the Doi moi (Renewal) cause comprehensively and synchronously.

However, this is only the very first step, and whether the congress will be truly a success or not depends on whether the resolution is put into reality to bring prosperity to the nation and happiness to the people, the Party leader said.

He stressed that, therefore, studying, learning, grasping and implementing the resolution are very important tasks that must be carried out seriously, drastically and methodically.

According to him, right in the first year of this tenure, the 15th National Assembly organized two sessions, and the Government, the Vietnam Fatherland Front, and the internal affairs-political, cultural, Party building and diplomatic sectors also held national conferences to launch the implementation of the resolution.

Following these conferences, Party Committees and Party organisations at all levels, sectors, agencies and units in the entire political system need to promptly build programmes and plans of actions to carry out the resolution in accordance with specific conditions of each locality, sector, agency, and unit, the Party chief requested.

He emphasized that Party building and rectification work is an important requirement closely associated with the development of the Party and the nation.

The Party chief noted that since Vietnam began the Doi moi cause in 1986, the Party has issued many resolutions on Party building and rectification, adding that in the past three tenures (11th, 12th and 13th), the fourth plenary session of the Party Central Committees all discussed and adopted important resolutions and conclusions on Party building and rectification, thus creating positive and clear changes and earning people’s trust, consensus and support, contributing greatly to implementing the tasks of bolstering socio-economic and cultural development, ensuring defence and security, and promoting international integration of the country.

However, problems and limitations remain, the Party leader said, noting that a number of cadres and Party members, including those who hold leading and managerial posts, have failed to uphold the sense of responsibility. They succumbed to individualism which led to violations of Party discipline and State regulations that required disciplinary measures and criminal penalties.

Therefore, the Conclusion of the fourth plenum of the 13th-tenure Party Central Committee was issued to intensify the building and rectification work for a really clean and strong Party and the political system in all aspects.

General Secretary Trong pointed to an outstanding new point of the Conclusion, that is the synchronized implementation of the building of the Party and political system; of building revolutionary morality and fighting individualism; and strict penalties for corruption and wrongdoings among cadres and Party members.

Amid the complexities brought by the ongoing COVID-19 pandemic, to ensure effective pandemic prevention and control work and at the same time strive to fulfil socio-economic development targets and realise the 13th National Party Congress’s Resolution, the Politburo and the Secretariat of the Party Central Committee have kept a close watch and provided timely guidance with specific decisions.

The Party leader identified three groups of major issues, which are measures for COVID-19 prevention and control; ensuring social welfare and people’s livelihood; and economic recovery and development.

According to the Party chief, despite many difficulties and challenges, the pandemic has so far been basically controlled, all aspects of life and socio-economic development activities have gradually adapted to the new normal conditions.

He attributed the positive results to concerted efforts of the entire political system, from the Party Central Committee, the National Assembly and the Government down to lower levels. The important thing is that sectors, localities, army and people have joined hands in consensus to implement strong measures, he said.

The Party chief highlighted that the macro-economy has stayed stable, social security has been ensured and national defence and social security maintained, while external relations continued to be expanded across fields. He added that important political events of the country, such as the 13th National Party Congress, the elections of deputies to the 15th NA and People’s Councils at all level for 2021 – 2026 tenure had took place safely with success.

He expressed his belief that with high consensus and unanimity of will and action of the entire Party and people, along with the whole-hearted help of overseas Vietnamese and international friends, Vietnam will definitely win over the pandemic and contribute to humankind’s joint efforts for a safe, peaceful world of friendship, cooperation and prosperity.

On the occasions of the Year of the Tiger 2022 and the 92nd founding anniversary of the Communist Party of Vietnam (February 3, 1930-2022), the Party leader wishes compatriots and soldiers nationwide, overseas Vietnamese and international friends good health, happiness and success.

Party Secretary General Nguyen Phu Trong, chairing the meeting of the Central Steering Committee for Anti-Corruption on November 18, said the investigation of violations in the healthcare sector should be hastened.