Over $474,000 worth of equipment stolen from under-construction expressway in southern Vietnam 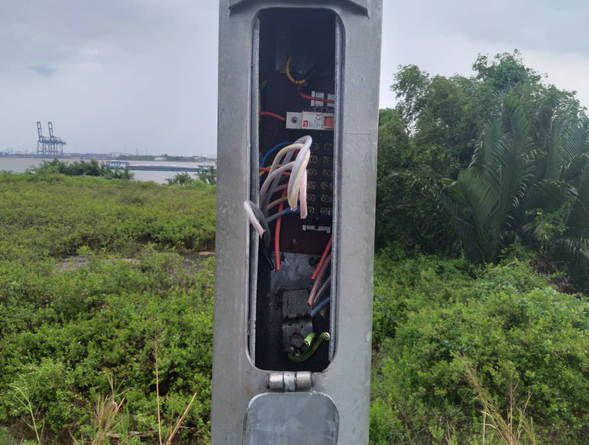 Cables were stolen from a light pole along the Ben Luc-Long Thanh Expressway in Vietnam. Photo: V.P. / Tuoi Tre

A large number of valuable equipment belonging to an under-construction expressway in southern Vietnam have been stolen over the past years, resulting in losses worth over VND11 billion (US$474,100).

The situation was recorded along the Ben Luc-Long Thanh Expressway, which runs through Long An Province, Ho Chi Minh City, and Dong Nai Province, according to the management board of the J2 package, which is responsible for building road, viaducts, and bridges of the project.

Along the bridge crossing the Cha River in Can Gio District, Ho Chi Minh City, over 80 percent of the power cables for the lighting system were gone.

About 57 anti-glare fences on the media strip, 10 anti-glare poles, and multiple cables of light poles were also stolen.

The J2 package was completed in August 2017 but has not been inspected and handed over to the project developer, the management board stated, adding that the loss of the equipment has resulted in unwanted costs for the contractor.

Certain units have been tasked with protecting the assets, but the thefts still persisted.

Costing VND31.3 trillion ($1.3 billion), the construction of the Ben Luc-Long Thanh Expressway was initiated in 2014, with Vietnam Expressway Corporation (VEC) being the project developer.

The project encountered several problems related to the investment capital and was halted in 2019.

During a meeting in May, the government submitted to the National Assembly a proposal to continue funding the projects developed by VEC, including the Ben Luc-Long Thanh Expressway, using the official development assistance (ODA) capital.

About 80 percent of the work has been finished, and the construction is expected to be completed in 2023, according to VnExpressnewspaper.