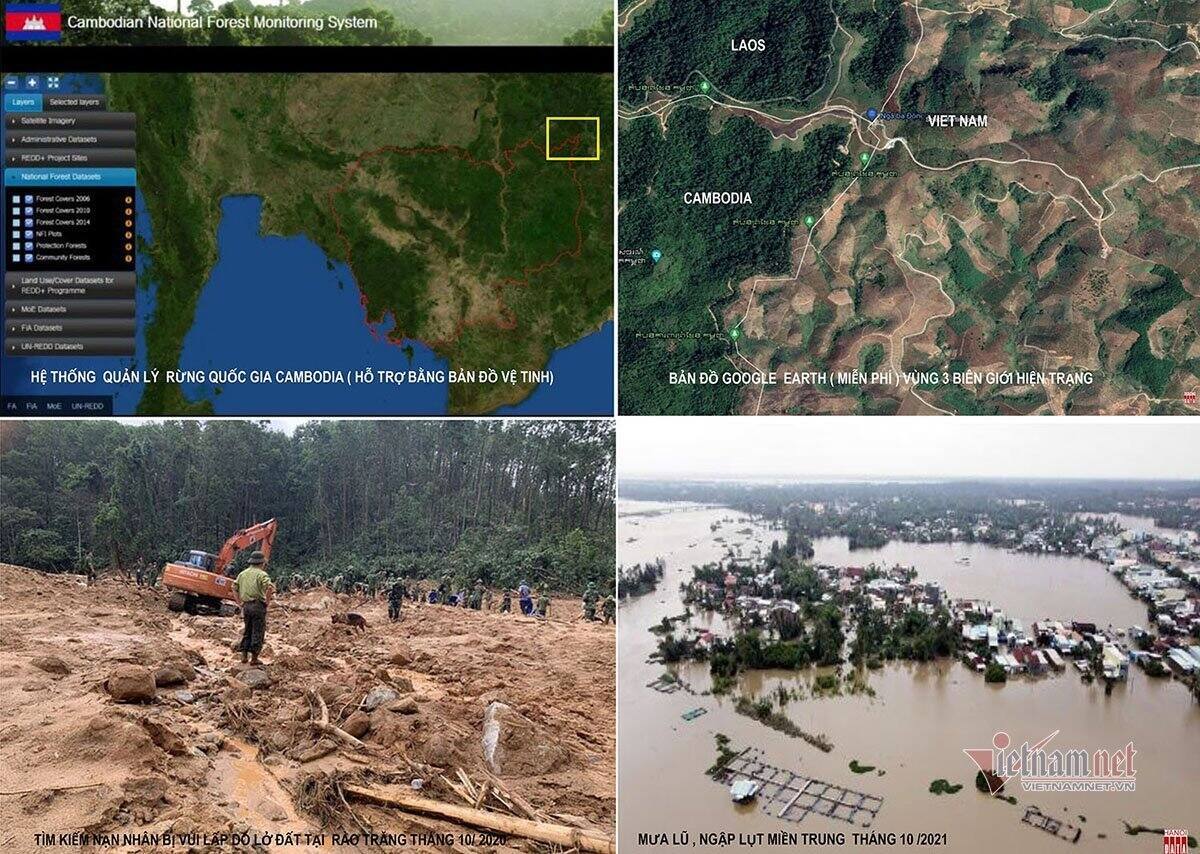 One square meter of forestland was valued at VND7,400, just high enough to buy half a pack of glutinous rice.

MONRE said it cross-checked cadastral map and field research with images from satellites. However, the statistics on forestland do not match the figure of 14.6 million hectares that Nguyen Xuan Cuong, who was then Minister of Agriculture and Rural Development, reported before the National Assembly on November 3, 2020.

The ministry did not show the 2019 map of current land use (1:1,000,000 scale), socio-economic areas (1:250,000) and explanations of the maps, so the difference of nearly 1 million hectare of forestland remains unexplained.

The huge error could be attributed to the differences in interpretation about forestland by MONRE, the agency that builds the cadastral map, and by the Ministry of Agriculture and Rural Development (MARD), the agency that manages the production and exploitation of forestland.

Google Earth photos of the border area of three countries shows that Cambodia’s forests are much better protected than Vietnam. This is the result of an effective forest protection policy, with a modern national forest management map information system, and the use of digital technology with satellite images and vivid real-time observation tools that are accurate and efficient with low costs.

The technologies are also available in Vietnam, provided by Vietnam’s technology firms. However, they are not used by state management agencies.

How is forestland managed in Vietnam?

Under the 1993 Land Law, the central land management agency – MONRE – sets technical procedures and regulations on building cadastral maps. The original cadastral maps are kept at the ministry.

However, the maps just show the overall panorama, with a large scale (1/10,000) not detailed enough to be used for land allocation.

Most state-owned afforestation yards don’t have maps of the land they are managing, which is the reason behind rampant forestland encroachment and disputes.

On November 3, 2020, the then Minister of Agriculture and Rural Development Nguyen Xuan Cuong reported before the National Assembly that the total forestland was 14.6 million hectares, including 10.3 million hectares of natural forests, and 4.3 million hectares of planted forests. The forest coverage ratio was 42 percent, higher than the world’s average level of 29 percent.

The 4.3 million hectares of planted forests have created 30 million cubic meters of timber. There are 4,600 wood processing enterprises, exporting $13 billion worth of forest products, which accounts for 30 percent of the $42 billion worth of farm exports.

A World Bank (WB) report showed that Vietnam exports large amounts of farm produce but at low prices, which lowers the agricultural added value and agricultural labor if compared with neighboring countries.

The bigger problem is the deforestation of natural forests to grow crops for export, which degenerates soil, causes pollution, and devastates biodiversity. Forestland, a public asset, is turning into production land and becoming private.

MONRE is still following the old land management scheme, under which there are six types of agricultural land, which makes it difficult for grassroots management agencies to manage land and unhelpful to natural resources management and exploitation.

In October 2021, MONRE on behalf of the National Assembly Standing Committee proposed that provincial authorities be allowed to use special-use forest for project development. However, the proposal was not approved.

The outdated management technology and the land management scheme is no longer suitable to the new conditions as Vietnam has to both cope with climate change and develop the economy.

The top priority, which can be done immediately, is to use digital technology to improve the natural resources management capability (replacing printed maps with digital maps and using satellite map apps).

The Ministry of Natural Resources and the Environment is doing two things – providing a material building service and managing natural resources. It would be better to separate the two functions when drafting the amendment to the Land Law.

Tan Hoang Minh, the winner at the auction for a land plot in an advantageous position in the Thu Thiem new urban area, has unexpectedly quit the game. The move has raised many questions.