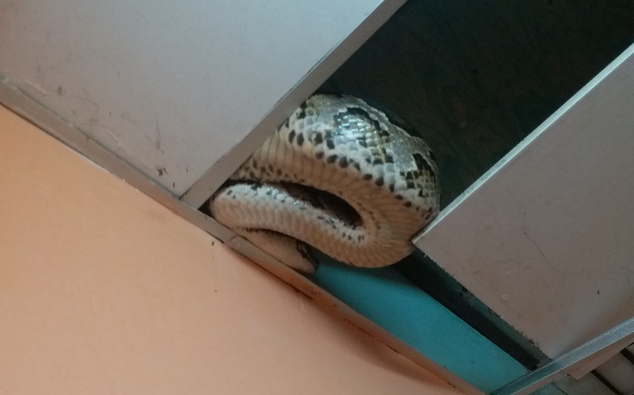 The python is found on the suspended ceiling at a house in Tan Phu District, Ho Chi Minh City in this photo supplied by officers.

Police officers in Ho Chi Minh City have captured a 25-kilogram python that was found on the ceiling of a local resident’s house.

The python was spotted on the suspended ceiling inside the bathroom of a house in Phu Thanh Ward, Tan Phu District, the municipal forest protection department confirmed on Saturday.

After the house owner reported the situation, nearly ten officers under the rescue police unit in Tan Phu District were mobilized to the residence.

It took them about two hours to remove the python from the ceiling.

The wild animal, which is three meters long and weighs approximately 25 kilograms, was later handed over to the municipal forest protection department.

It was identified as a reticulated python, which is listed in Vietnam’s Red Data Book of rare and endangered species.

The python has been released to Cat Tien National Park in southern Dong Nai Province, a forest protection officer said.