The decision on direct appointment of contractors for 12 component projects of the North – South Expressway is unprecedented. 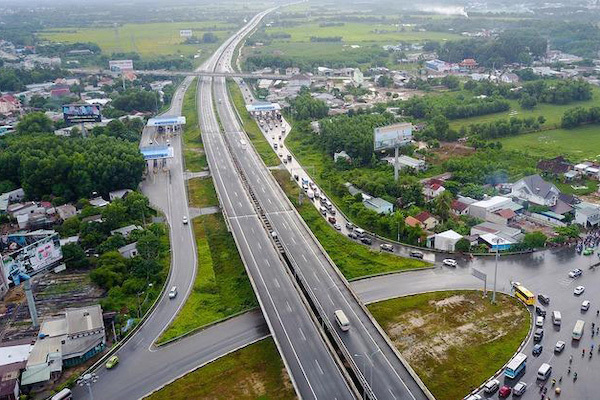 In a resolution in the development of the eastern section of the North – South Expressway in 2021-2025, the Government allowed the Minister of Transport and competent agencies to directly appoint contractors.

This will be applied in 2022 and 2023 to consultancy, technical infrastructure relocation, compensation for site clearance and re-settlement package deals.

The decision on direct appointment of contractors was released following the proposal by the Minister of Transport and the inspection of the Ministry of Planning and Investment (MPI).

The National Assembly approved the investments in the project in early November 2021.

The Ministry of Transport believes that the direct appointment of contractors will help shorten the project implementation time by 3-4 months and the project will be completed on schedule in 2021-2025.

Bidding is the process of selecting contractors to perform a contract on providing consulting services, non-consulting services, procurement of goods, and construction and installation services on the basis of competitiveness, fairness and transparency in accordance with the 2013 Law on Bidding.

As such, bidding is recognized as a mechanism to create healthy competition that chooses suitable contractors to implement projects. Tenderers will have to carefully calculate the implementation cost based on their advantages and disadvantages so as to bid reasonable prices to win the bids.

In addition to the cost, investors can set additional criteria to choose suitable contractors, including the warranty time and commitment to complete projects sooner than initially planned.

Meanwhile, direct appointment of contractors chooses contractors directly, without bidding. Contractors have to satisfy the requirements set by investors and sign contracts with investors. However, in this case, there is no competition, which may lead to unreasonable prices.

In theory, there is no market price in any transaction or investment with just one player.

As such, the decision on direct appointment of contractors for the 12 component projects shows determination to complete the project within the time set by the National Assembly in Resolution 44/2022/QH15.

Nevertheless, the direct appointment of contractors, in theory, can shorten the time of project implementation, but the benefit is insignificant compared with the possible risks and losses investors have to face if they mistakenly choose bad contractors.

In many cases, the execution still will not be implemented because of problems in site clearance, even though the contractors have been found through appointment.

How to weed out bad contractors?

Under the draft of the resolution, the Ministry of Transport will hand over documents for site clearance to localities prior to June 30. This is just the beginning of the site clearance which will have to undergo time-consuming stages.

In a report to the National Assembly about the North – South Expressway in 2021-2025, the State Audit said the Government reported total investment capital of the four-lane project of VND146.99 trillion for 729 kilometers of highway, which means VND175.4 billion per kilometer, not including expenses on site clearance.

Also according to the State Audit, after considering the investment rates of the North-South Expressway projects in 2017-2020, the total investment capital of the 2021-2025 is VND130.605 trillion, or VND16.33 trillion lower than the Government’s statement (VND152.9 billion per kilometer).

The State Audit has also asked the Government to instruct the Ministry of Transport and relevant agencies to thoroughly check the total investments and the feasibility of the projects.

Therefore, once the direct appointment of contractors for the mega projects worth trillions of dong is applied, it’s necessary to set a lot of criteria to ensure that the projects can be implemented in a transparent way.

People fear that the direct appointment of contractors may lead to a ‘ask-and-grant’ scheme, which makes it difficult to choose the best partners. In principle, many ministries and branches join forces to choose contractors. When problems occur, the problems are blamed on collectives, not individuals.

Transparency and publicity are needed to be able to choose the best contractors to ensure the investment efficiency of projects.

It is necessary to increase the product warranty period, and specify the responsibilities of relevant organizations and individuals, and to impose strict sanctions for violations and avoid unreasonable increases in investment capital.

The Government also needs to create favorable conditions to implement projects by simplifying administrative procedures, site clearance and licensing. There needs to be a ‘conductor’ that manages the implementation and relevant officials must take responsibility for problems if they occur.

The National Assembly on Tuesday ratified a resolution on building the eastern section of the North-South Expressway during its extraordinary meeting in Hanoi.

Thus far, the Law on Public-Private Partnership Investment has yet to make a major effect on the transport sector.