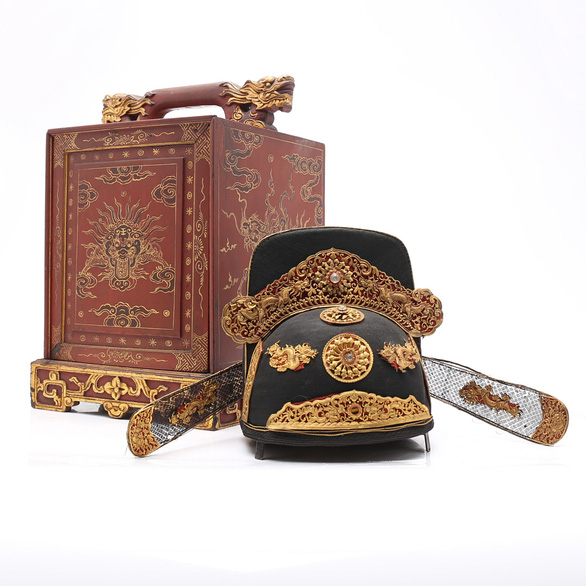 This Nguyen Dynasty mandarin hat and the wooden box that goes with it were sold at the record price of €600,000 at the Balclis auction house on October 28, 2021. Photo: Balclis

The record rate for the mandarin hat dating back to the Nguyen Dynasty, the last Vietnamese dynasty, was set at the auction held on October 28 by the Spanish auction house of Balclis.

To many observers who are familiar with auctioned artifacts at Balclis, that was one of the craziest auctions they had ever seen.

Before the public auction around one week, bidders paid much more attention to the mandarin hat that Balclis introduced on its website on October 22.

The hat comes with a wooden box that is gilded and decorated with lacquer. Apart from some tiny damage, the hat is preserved rather well.

The discrepancy was unprecedented for the auction house.

The price soared wildly on October 28. Believing the mandarin hat would become the most attention-catching artifact, the auctioneer used a tactic to have an impact on the bidders’ psychology.

He delayed the auction for some minutes, which caused a little bit of disruption in the event held both online and in-person.

Maybe owing to the tactic, the bidding prices continued to surge remarkably when the auction was resumed after a short hiatus.

When the bidding reached €270,000 ($313,000), all the bidders who were present at the auction house gave up, leaving the race for just two online competitors.

The two continued their competition in ten minutes. Finally, the bidder with code-number 5618 secured the hat when the hammer was hit to confirm the closing price at €600,000, which is a record price for a Vietnamese artifact to date.

The Nguyen Dynasty mandarin cap became the priciest item sold at the auction on October 28 at Balclis, far outstripping other Vietnamese artifacts that were offered then.

According to collector Nguyen Huu Hoang, who specializes in the Nguyen Dynasty’s monarchical robes, the mandarin hat is rather rare in the market.

He is not surprised at the high price the artifact could fetch given its well-preserved condition.

Another artifact researcher, Tran Dinh Son, suggests that the mandarin hat could have been carried abroad many years ago when he looks at the item’s nearly intact state.

It could be carried by the French colonials, or it could be used as a gift by mandarins who worked under the reign of Emperor Tu Duc (1829-1883), the longest-reigning monarch of the Nguyen Dynasty.

At the auction on October 28, the bidding race did not only include the mandarin hat, but also a royal robe from the Nguyen Dynasty and a pair of altars made of wood originally from Vietnam.

Balclis is an auction house that was founded by Antonio Climent Benaiges, a pioneer importer of antiques, and Juan Baldrich in Barcelona, Spain, according to Balclis’s profile on LinkedIn.

It is the leading Spanish auction house in the international market.

Since it was founded in 1979, Balclis has auctioned over 200,000 works of art, items of jewelry, and antiques.