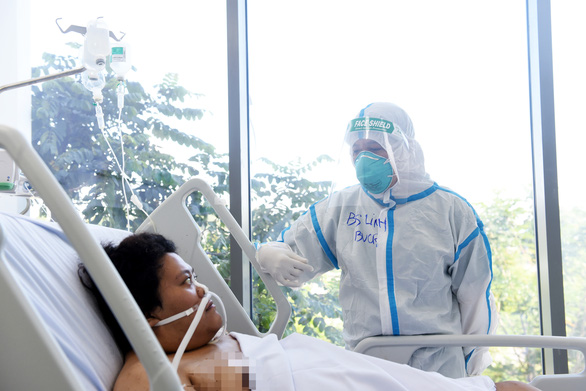 Among the patients having recovered from COVID-19 in Vietnam are many striking cases, including two with oversized bodies in Ho Chi Minh City, who have done so thanks to their strong will and doctors’ persistent treatment efforts.

With a bundle of colorful flowers in her hand, Nguyen Ngoc Bao Chau recently arrived at Cho Ray Hospital in Ho Chi Minh City to visit a doctor who gave her the last chance for recovery from COVID-19.

Dr. Tran Thanh Linh, head of the hospital’s emergency resuscitation department, was really happy seeing Chau again after around six months since she was discharged from COVID-19 Resuscitation Hospital in Thu Duc City, where he had been sent in to help treat critically-ill patients.

“Hello my little love, how much do you weigh now? Let me see how healthy and beautiful you have become now,” Dr. Linh said jokingly when he saw his patient.

Linh replied that her weight went down remarkably to 97 kilograms and her health gradually stabilized, except for the rapid heartbeat that happened when she made strong movements.

She added she was trying to exercise, as instructed by doctors, to return to normal life soon.

Chau was a special case among the severely-sick patients that Dr. Linh had treated, as she had a very strong will to beat the disease despite facing death on many occasions during her treatment at the hospital.

In mid-July last year, when the pandemic was at its peak in the city, Chau fell ill and was confirmed COVID-19 positive after being thought to only run a viral fever for many days before.

She was sent to Cu Chi Hospital, one of the four COVID-19 treatment hospitals in the city at that time, for quarantine and treatment and was brought to the hospital’s intensive care unit two days later due to her critical conditions, including a deep fall in the blood oxygen saturation index (SpO2).

Chau fell into a coma the next day and did not recover until the 20th day of her admission to COVID-19 Resuscitation Hospital in Thu Duc.

When she was conscious again, she had vague feelings about everything around, not knowing where she was, until she could talk with doctors and other health workers, Chau recalled.

She was later placed on extracorporeal membrane oxygenation (ECMO) as she, with her underlying condition of obesity, was suffering damage in multiple organs including her lungs, liver, kidneys, and heart.

During those days, what Chau remembered the most was Dr. Linh’s repeated saying, “Let’s give this case a chance.”

“With the chance given by the doctor, I decided that I had to try my best to struggle with and defeat the disease in reponse to doctors’ efforts to save me,” Chau said.

After being taken off ECMO, Chau faced the problem of gaining back her functions post-COVID, mainly due to her big body mass, and worrying about whether she could be weaned off the ventilator so that she could recover and return home.

Chau narrated that Dr. Linh, sent in from Cho Ray, and other medical workers gently slapped her shoulder and said, “It’ll be OK for you. Try and you will eventually go home.”

Such words of encouragement gave Chau more energy and strength to cope with the respiratory disease and follow doctors’ instructions during the treatment process, she said.

As a result, Chau recovered day after day until she was qualified for a discharge.

Chau deemed her recovery from COVID-19 a miracle given by Dr. Linh and other doctors and health workers at the hospital.

“With Chau’s obesity, it was very difficult to wean her off ECMO and the ventilator. But she was very determined to cope with her critical conditions,” Dr. Linh said.

Despite the pain, she did not want to use sedatives, and even when suffering from pulmonary hemorrhage, she still tried to practice breathing to speed up her healing, the doctor narrated.

“Witnessing such extraordinary efforts from her, we tried our best to get her out of Death’s scythe,” Dr. Linh said.

Meanwhile, Chau confided, “Doctors have saved my life so I have to live responsibly.”

She also disclosed that she has now shifted to living more slowly.

Another patient amazingly beating COVID-19 is 28-year-old Vu Quoc Dung, who was discharged from Field Hospital No. 16 after nearly three months of struggling with the disease.

After contracting COVID-19, Dung was treated at Nhan Dan Gia Dinh Hospital before being transferred to Field Hospital No. 16, where he was diagnosed with severe respiratory failure.

He had underlying conditions such as type-2 diabetes and level-3 obesity, with a weight of 140 kilograms and a body mass index of up to 48 kilograms per square meter.

Dung fell in a coma for months at the hospital and doctors believed he would face critical conditions very soon.

Only after 18 hours of admission, he was placed on tracheal intubation, invasive mechanical ventilation, and ECMO intervention.

At this time, Dung’s lungs were severely damaged and had up to 80 percent of their volume become consolidated so doctors predicted that he might die at any time later.

“But we were determined to save the patient’s life despite his little chance of survival,” recalled Dr. Giang Minh Nhat, head of the intensive care unit at the hospital.

“At the hospital, the doctors and nurses treated me like their family members. They always encouraged me and told me to think positively. They said they would be beside me to help me fight the disease,” Dung recalled.

Thanks to Dung’s extraordinary energy and constant efforts of doctors and health workers, a miracle happened when his lungs began to gradually recover after nearly three months of treatment.

On January 23 this year, Dung was taken off the ventilator.

“Doctors here have given me a new life,” Dung said.

Vu Dinh Tam, Dung’s father, said he was overjoyed on the day of his son’s discharge. A doctor said that Dung could finally make it following efforts by doctors and health workers as well as his own iron will.

“This is really beyond my imagination. During nearly three months of my son’s hospitalization, nobody, no matter how optimistic they were, could imagine that Dung could be as healthy as he is today,” Tam said.