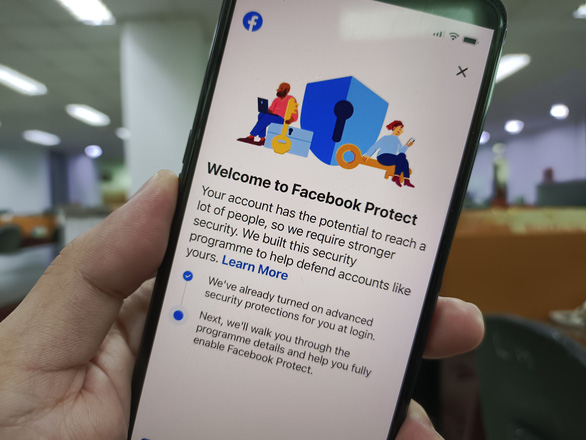 Facebook parent Meta has recently made its Facebook Protect option available in Vietnam after launching its global expansion in September last year.

“As part of our ongoing improvements to security, we’re expanding Facebook Protect, a program designed for people that are likely to be highly targeted by malicious hackers,” Nathaniel Gleicher, head of security policy at Meta, said in a blog post on its website in December.

He added that the company has been working to make enrollment and use of two-factor authentication as frictionless as possible.

Facebook users in Vietnam now do not have to take any action until receiving a notification on Facebook that says, “You’re eligible to enroll.”

Meta first tested Facebook Protect in 2018 and expanded it ahead of the 2020 U.S. election.

“We began our global expansion in September of [2021],” Gleicher said.

“Since then, more than 1.5 million accounts have enabled Facebook Protect, and of those, nearly 950K accounts newly enrolled in two-factor authentication.

“We are on track to expand the program to more than 50 countries by the end of [2021], including the United States, India, and Portugal.”

Facebook Protect is an important step forward for these highly targeted communities when the outcome is encouraging, he remarked.

“In early testing, simplifying our enrollments flows, improving customer support, and mandating Facebook Protect brought adoption rates to over 90 percent in one month for these groups,” the blog post said.