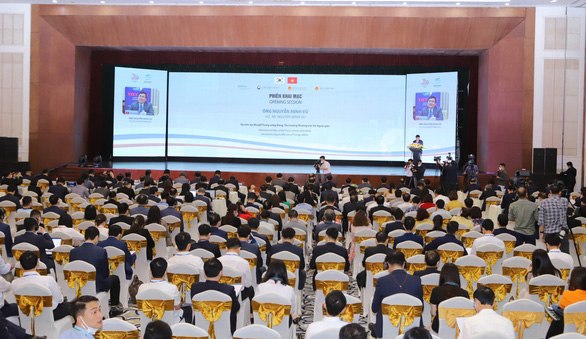 Jointly organized by the Vietnamese Ministry of Foreign Affairs, the South Korean Embassy in Vietnam and the provincial administration, the event attracted more than 500 delegates including Vietnamese and South Korean officials and representatives of enterprises from both countries.

This is the first event of a series of activities to mark 30 years of diplomatic ties between Vietnam and South Korea, aiming to bolster investment partnership between South Korea and Vietnam as well as Thanh Hoa in particular, Deputy Foreign Minister Nguyen Minh Vu told the conference.

South Korea is currently the biggest investor of Vietnam, with 9,223 projects worth $74.7 billion, and the third largest trade partner, with two-way turnover reaching $78 billion last year.

The diplomat expressed his belief that the two countries can increase their bilateral trade to $100 billion in 2023 and $150 billion in 2030, the Vietnam News Agency cited Vu as saying.

The official hoped that after the Meet Korea 2022, Korean investors will invest in many projects in central Vietnam, including Thanh Hoa.

Localities of the two countries have signed about 80 memoranda of understanding covering various areas including investment, trade, agriculture, education-training, labor and people-to-people exchange.

South Korean investors are now running 37 projects and joint ventures with Japan, with total registered capital of over $1.6 billion, in Thanh Hoa alone. They account for 26.5 percent of the province’s total number of foreign direct investment (FDI) projects.

The diplomat commented that Vietnam and South Korea are in a thriving relationship, with the former being an important pillar of the latter’s New Southern Policy Plus. Meanwhile, South Korea is an major partner of Vietnam in various areas.

South Korean Ambassador to Vietnam Park Noh Wan said that he hopes the event will be the opening for a new development period of the strategic partnership between the two countries, as well as between South Korea and Thanh Hoa and other localities in Vietnam’s northern and north-central regions.

This year is a meaningful year for both countries when they will celebrate their 30th anniversary of diplomatic relations, the ambassador said, adding he hoped that through the event, businesses of both sides will expand their investment cooperation in multiple fields, thereby contributing to boosting the economic growth of Vietnam.

Besides economic partnership ties, South Korea has also donated 1.4 million doses of COVID-19 vaccines for Vietnam to support its fight against the pandemic.