Marc Knapper sworn in as new US ambassador to Vietnam 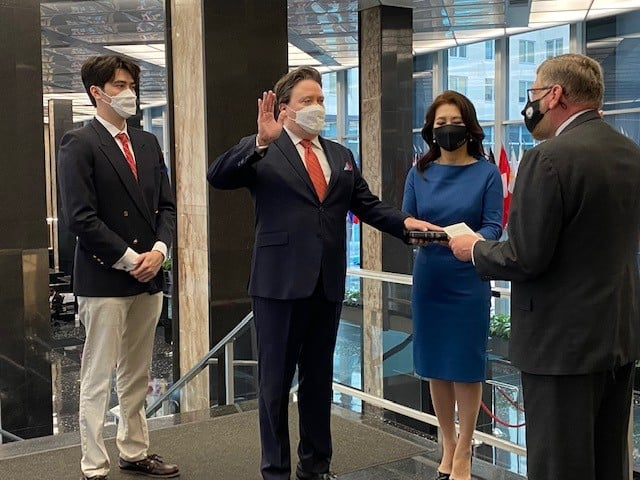 U.S. Ambassador to Vietnam Marc Knapper (C), his spouse, and son at the swearing-in ceremony at the Department of State. Photo: U.S. Embassy in Hanoi

Marc Knapper has been sworn in as the new United States ambassador to Vietnam, the Bureau of East Asian and Pacific Affairs under the U.S. Department of State confirmed on Tuesday morning.

Knapper was joined by his spouse and son during the swearing-in ceremony at the headquarters of the U.S. Department of State.

“Congratulations to Ambassador Marc Knapper on his swearing-in as the new United States Ambassador to Vietnam!” the Bureau of East Asian and Pacific Affairs tweeted. “The United States supports a strong, independent, and prosperous Vietnam.”

The U.S. Embassy in Hanoi wrote on its Facebook page, “We look forward to welcoming Ambassador Knapper to Vietnam soon!”

Knapper’s term will officially begin when he presents his credentials to the Vietnamese state president.

The U.S. Senate approved Knapper as the next ambassador to Vietnam on December 17 after he was nominated by President Joe Biden in April.

He is the eighth ambassador to Vietnam since the two countries normalized their diplomatic relationship in 1995.

The position had been vacant for about eight months prior to Knapper’s appointment.

Knapper is fluent in Vietnamese and led the political section of the U.S. Embassy in Hanoi for three years, according to the U.S. Department of State.

He had previously served as Deputy Assistant Secretary for Korea and Japan since August 2018.

During a hearing in July, Knapper pledged to make more efforts to elevate the Vietnam-U.S. comprehensive partnership to a strategic partnership.

The two nations should focus on four main fields including security, investment and trade, post-war settlement, and people-to-people exchange, the diplomat said.